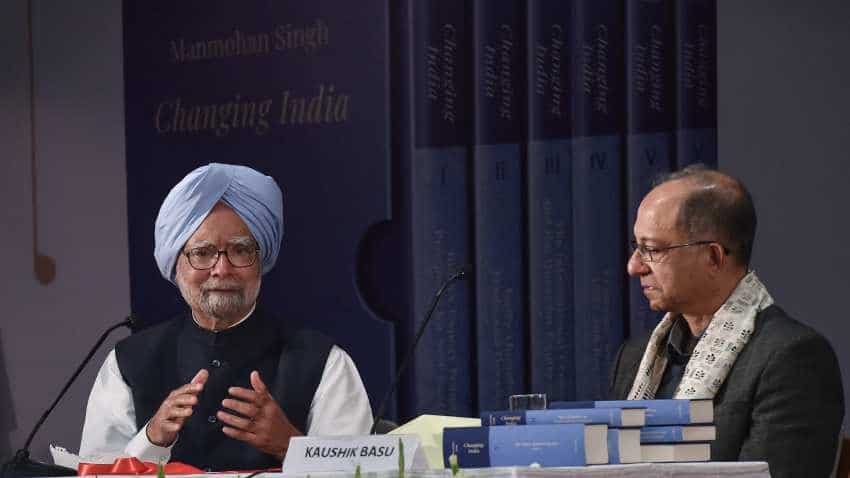 Singh remembered his first Budget speech when he quoted Victor Hugo as said "no power on earth can stop an idea whose time has come". Image source: PTI
Written By: PTI
RELATED NEWS

Former Prime Minister Manmohan Singh Tuesday said that India is destined to be a major powerhouse of the global economy despite difficulty and hurdles. Taking a dig at his critics for calling him a silent prime minister, Singh said he was never afraid of talking to the media and rather interacted with the press very regularly.

He also revealed that he was not only an "accidental prime minister" but also an "accidental finance minister" of the country as the post was denied by I G Patel, the former RBI Governor and his immediate predecessor in the RBI.

Singh was made the finance minister in 1991 by the then Prime Minister P V Narasimha Rao, who is credited for changing the course of the Indian economy and bringing in market liberalisation.

The former prime minister said that no government could change the course of the economy and broadly followed the path set by him as a finance minister in the Narasimha Rao-led government.

Speaking at the launch of his 6 volume book series called 'Changing India', Singh said "despite all the hiccups and hurdles, I have no doubt that India will get its action right. Despite the difficulty that may be on the horizon, this country is destined to be a major powerhouse of the global economy."

Singh remembered his first Budget speech when he quoted Victor Hugo as said "no power on earth can stop an idea whose time has come".

"I suggest to this august House that the emergence of India as a major economic power in the world happens to be one such idea. Let the whole world hear it loud and clear. India is now wide awake. We shall prevail. We shall overcome," he quoted himself from his Budget speech of 1991.

"Therefore, I have always believed at a time when India was at a very serious crisis that we will overcome and we will prevail and with determination we converted the crisis of 1991 into a great opportunity to reform the economy. The results of that for everyone to see," he said referring to India's journey since then.

There have been several changes of the government but the broad thrust of the economic policy has not changed in the last 25 years, he said adding that as a result, India is one of the few countries witnessing an average growth rate of 6.7 per cent to 7 per cent for the past 25 years.

"We could do more. We shall do more. I sincerely hope and believe that India is destined to achieve its destiny... It was a belief which sustained me as a bureaucrat, as a finance minister and as the prime minister. I stand by that," he said.

He narrated an incidence of 2005 when he was advised by officials not to address a press conference organised by National Press Club in Washington and said officials were nervous but it turned out to be successful and the verbatim record is published in these volumes.

"I certainly would like to say that I was not the prime minister who was afraid of talking to the press. I met the press regularly and on every foreign trip that I undertook, I had a press conference in the plane or immediately after the landing. There are large number of press conferences whose results are also described," he said.

The senior Congress leader also said that he was also an accidental finance minister as the post was first offered to I G Patel but he declined. He said his appointment as the India's finance minister in 1991 was also surprised him.

Singh said he did not believe P C Alexander when the latter told him that the then Prime Minister Rao wanted him to take over as the finance minister in 1991 to steer the crisis-ridden Indian economy.

"I was then chairman of the University Grant Commission, and as usual went to office next day. Somehow Narasimha found me and asked if he has received communication from Alexander," Singh recalled.

To Rao's response, Manmohan Singh said, "I did not take him seriously." Rao asked him to get dressed and appear for the swearing-in for the Cabinet minister, he said while narrating the episode of his journey to the finance ministry.