India celebrated its 70th Republic Day with a grand display of its military might and rich cultural diversity as the ceremonial parade rolled down the majestic Rajpath here in presence of South African President Cyril Ramaphosa as the chief guest. 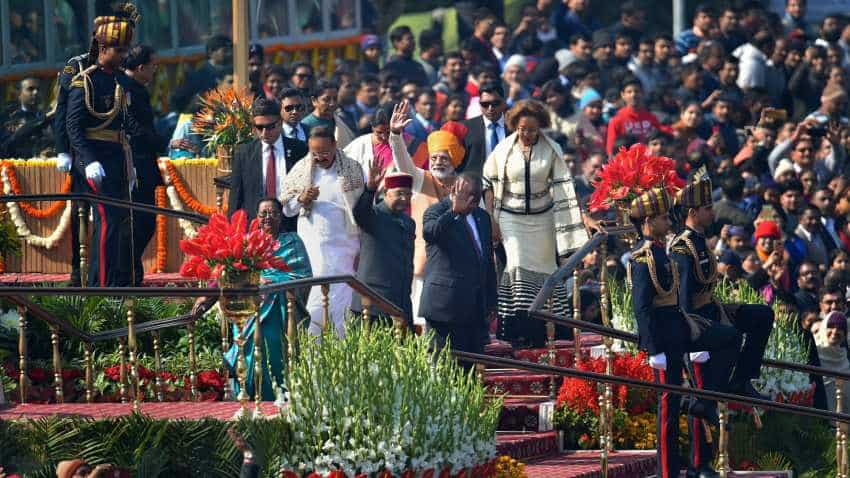 India celebrated its 70th Republic Day with a grand display of its military might and rich cultural diversity as the ceremonial parade rolled down the majestic Rajpath here in presence of South African President Cyril Ramaphosa as the chief guest. Prime Minister Narendra Modi paid his tributes to the martyrs by laying a wreath at Amar Jawan Jyoti before the start of the parade in presence of Defence Minister Nirmala Sitharaman and the three service chiefs.

Later Modi, wearing his traditional kurta pajama and the trademark Nehru jacket, reached the Rajpath and received and greeted President Ram Nath Kovind and the chief guest. At the unfurling of the tricolour, the band played the national anthem with a 21-gun salute fired in the background.

The overall theme for the Republic Day celebrations this year is the 150th birth anniversary of Mahatma Gandhi and tableaux of many states, themed on the preeminent leader of the Independence movement who championed the idea of non-violence, were lined up during the parade. Officials said Ramaphosa is the second South African president, after Nelson Mandela, to attend the grand event as its chief guest.

Four Indian National Army (INA) veterans, aged over 90 years, are taking part in the parade, among the many firsts for the Republic Day event. India's military might was also on display, with the artillery gun system M777 American Ultra Light Howitzers, recently acquired from the US and K9 Vajra, a self-propelled artillery gun, showcased on Rajpath, being new additions this year.

'Nari Shakti' (women power) was on full display on the ceremonial boulevard with an all-woman Assam Rifles contingent creating history this year by participating for the first time in the parade, which was led by Maj Khushboo Kanwar. Contingents of the Navy, Army Service Corps and a unit of Corps of Signals (transportable satellite terminal) were led by women officers too, as the crowd cheered.

The parade took place in a cold weather amid a heavy security blanket with thousands of security personnel, anti-aircraft guns and sharpshooters deployed in view of the event. The march began with showering of flower petals by helicopters led by the parade commander, parade second-in-command and Param Vir Chakra and Ashoka Chakra awardees.

Twenty six children who won the Pradhan Mantri Rashtriya Bal Puraskar also passed through the parade in an open jeep followed by presentations by school children. The motorcycle display followed it which was welcomed by crowds and fly-past was observed after it.
Chilly weather conditions failed to dampen the spirits of people who came to watch the parade.