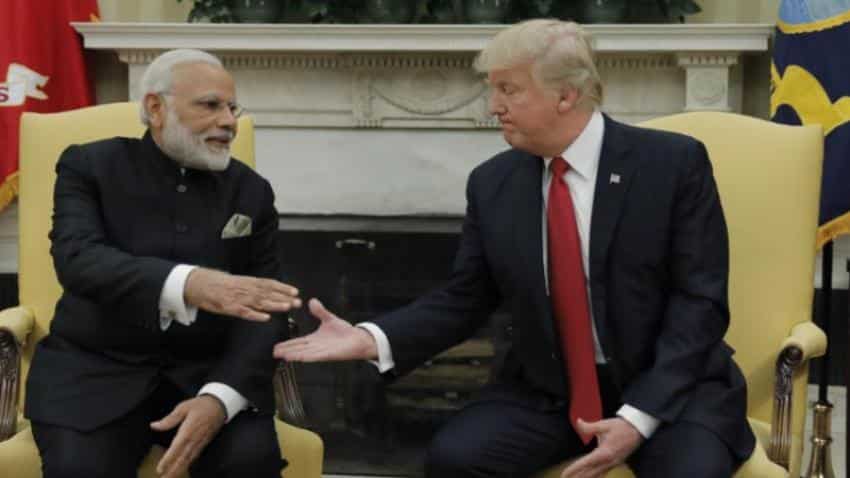 India-US defence relationship was mentioned in the context of Indo-Pacific region, whereas it gave a very prominent role to India in South and Central Asia. Image source: Reuters
RELATED NEWS

Describing India as a "leading global power", the US today unveiled its new National Security Strategy (NSS) that said it will "deepen" America's strategic partnership with India and support its leadership role in Indian Ocean security and throughout the broader region.

With an eye on China's One Belt One Road (OBOR) and the China-Pakistan Economic Corridor (CPEC), the US administration said it will help South Asian countries "maintain their sovereignty" as China increases its influence in the region.

The 68-page document said the US will seek to increase quadrilateral cooperation with Japan, Australia, and India.

"We will expand our defence and security cooperation with India, a Major Defence Partner of the United States, and support India's growing relationships throughout the region," the NSS said, noting that its vision for Indo-Pacific excludes no nation.

India-US defence relationship was mentioned in the context of Indo-Pacific region, whereas it gave a very prominent role to India in South and Central Asia.

"We will deepen our strategic partnership with India and support its leadership role in Indian Ocean security and throughout the broader region," according to the NSS which the White House said sets a positive strategic direction for the US that will restore America's advantages in the world and build upon our country's great strengths.

The NSS said it will press Pakistan to intensify its counter-terrorism efforts, since no partnership can survive a country's support for militants and terrorists who target a partner's own service members and officials.

"The United States will also encourage Pakistan to continue demonstrating that it is a responsible steward of its nuclear assets," it said adding the US will continue to partner with Afghanistan to promote peace and security in the region.

In an apparent reference to the OBOR and CPEC, the NSS said, "We will help South Asian nations maintain their sovereignty as China increases its influence in the region".

The recent Chinese move in Sri Lanka and Maldives is seen as an effort on their part to encroach eat on their sovereignty with similar fears in Pakistan.

India has objected to CPEC as it passes through Pakistan-occupied Kashmir.

The US, it said, continues to face threats from transnational terrorists and militants operating from within Pakistan.

"The prospect for an Indo-Pakistani military conflict that could lead to a nuclear exchange remains a key concern requiring consistent diplomatic attention," NSS said.

US interests in the region include countering terrorist threats that impact the security of the US homeland and its allies, preventing cross-border terrorism that raises the prospect of military and nuclear tensions, and preventing nuclear weapons, technology, and materials from falling into the hands of terrorists, it said.

"We seek an American presence in the region proportionate to threats to the homeland and our allies. We seek a Pakistan that is not engaged in destabilising behaviour and a stable and self-reliant Afghanistan," the NSS said.

Insisting that it is committed to supporting the Afghan government and security forces in their fight against the Taliban, al-Qaeda, ISIS, and other terrorists, the NSS said the US will bolster the fighting strength of the Afghan security forces to convince the Taliban that they cannot win on the battlefield and to set conditions for diplomatic efforts to achieve enduring peace.

"We will insist that Pakistan take decisive action against militant and terrorist groups operating from its soil," it said.