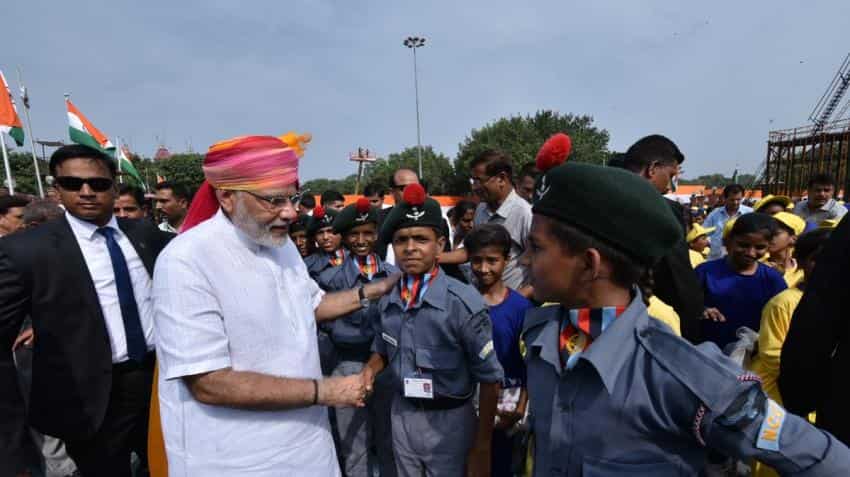 Prime Minister Narendra Modi while delivering his third speech on 70th Independence Day on Monday from the Red Fort in New Delhi touched upon several issues right from GST to inflation to his government's work in the last two-and-half-years to terrorism.

Here are key things that PM Modi said in his speech on 70th Independence Day:

1. March from self-governance to good-governance is a resolve of entire nation, it will need sacrifices.

10. We have brought inflation rate below 6%; I will continue to work to ensure food plate of poor is not affected by inflation.

11.Sowing of pulses has increased 1.5 times this year, it will help solve problem of demand shortfall.

12.90 shut irrigation schemes will be revived; 77,000 solar pumps distributed to bring down input cost of farmers.

14. I have tried to adopt the strategy of 'Reform, Perform and Transform'; tried to avoid populism.

16. 99.5% of past dues of sugarcane farmers have been cleared; 95% of sugarcane sold this season has been paid for to farmers.

18. GST will strengthen economy; all parties are to be thanked for its passage.

19. Our social unity is most important; division in the name of caste, creed hurts the country. Need to rise above all these issues.

20. A strong country cannot be build without a strong society which is based on social justice.

21. Tough and "sensitive" approach is required to tackle the age-old social evils whether it is castism or untouchability.

22. Country will not yield to terrorism and extremism, PM Modi asserted and asked youth to shun violance and return to mainstream.

23. PM Modi targeted Pakistan by saying that they glorify terrorists who attack us while India cried when children were killed in terror attack on Peshawar.

24. He announced 20% increase in pension of Freedom fighters.

25. Government to bear up to Rs 1 lakh healthcare expenses annually for below poverty line (BPL) families.