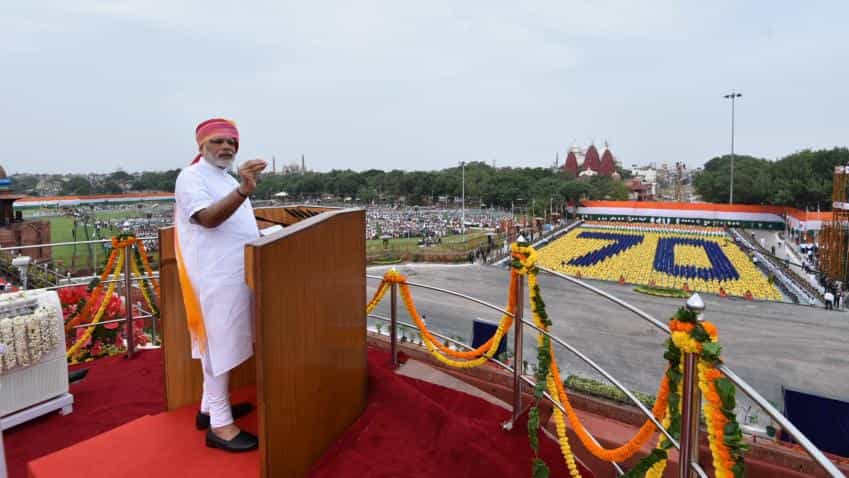 Prime Minister Narendra Modi on Monday said the focus of his government was to change the lives of the common people, and listed the fast issuance of Aadhaar Cards, passports and income tax refunds as ares where much has been achieved.

"There was a time when people were more scared of income tax authorities than police officials, particularly among middle class families. I want to change that," the Prime Minister said in his address to the nation on India`s 70th Independence Day.

"In fact, while income tax refunds used to take forever earlier, it takes no more than three weeks today."

Similarly, Modi said, while it took six to eight months to get a passport, it just takes a couple of weeks now even though around two crore people apply for it annually now compared with around 20,000 earlier.

"We have also connected 70 crore Indians to Aadhaar and social security schemes," he said in his address.

On energy, the Prime Minister said, renewable sources were his government`s focus, notably solar and wind.

Towards that, he added, LED bulbs which were being sold for as high as Rs 350 each were being distributed by his government for Rs 50 each now.

To reach electricity to the remote corners of the country, 50,000 km of transmission lines were being erected now as opposed to 30,000-35,000 km earlier.

"Electricity has already reached 10,000 villages out of the 18,000 unelectricified villages.

"After 60 years of freedom, only 14 crore LPG (cooking gas) connections were added. But we have added more than 4 crore new connections in just 60 weeks."

Prime Minister Narendra Modi on Monday said the pan-India Goods and Services (GST) tax regime will strengthen the Indian economy and thanked all political parties for the passage of the relevant bill to initiate the process.

"GST will give strength to our economy. All parties are to be thanked for its passage," Modi said in his Independence Day address from the Red Fort.

"GST is also one such tax reform that will help us bring financial stability," said the Prime Minister. "One nation, one grid and one price is what we have worked on."

Prime Minister Narendra Modi on Monday said every major global agency has ranked in India the best investment destination, even as the country`s economy has continued to grow well despite the global gloom.

Be it the International Monetary Fund, the World Bank or the World Economic Forum, they have all declared India to be the best destination for global capital, Modi said in his Independence Day address from the Red Fort.

"It is important for India to remain relevant and lead the global economy. But that is possible only if we adopt global standards. In recent days you have already seen how rating agencies have appreciated our moves on ease of doing business."

Prime Minister Narendra Modi on Monday said the government has given a new momentum to the construction of roads in rural areas now built at the pace of 100 km per day.

In his Independence Day speech, Modi said the government`s flagship rural connectivity programme was introduced by former Prime Minister Atal Bihari Vajpayee but it it was implemented later at a slow speed.

Modi said his government had brought a new momentum to the Pradhan Mantri Gram Sadak Yojana to help accomplish the dream of villagers who want good roads.

"Earlier village roads were constructed at the rate of 70-75 km per day. Now we construct 100 km in a day."

"Despite the difficulties faced due to two successive years of failed monsoon, his government had brought down the annual inflation rate to below 6 percent from 10 per cent earlier.

"Our government faced a lot of challenges in terms of price rise due to two successive years of drought situation," Modi said in his Independence Day address.

"Under the previous government, the inflation level had crossed the 10 per cent mark. But we did not let it rise above 6 per cent."

People were being provided passports in just one or two weeks now though around two crore applications are received annually compared to 40-50 lakh application in earlier years, he said in his Independence Day speech.

People do not need any recommendation now to secure passports, he said.

India faces "lakhs of problems" but Indians have the intelligence to overcome them, Prime Minister Narendra Modi said on Monday.

"Yes, we face several problems. But we are capable of overcoming them," Modi said in his Independence Day speech from the Red Fort.

"India has lakhs of problems," he added. "But the 125 crore Indians have the intelligence to overcome them."