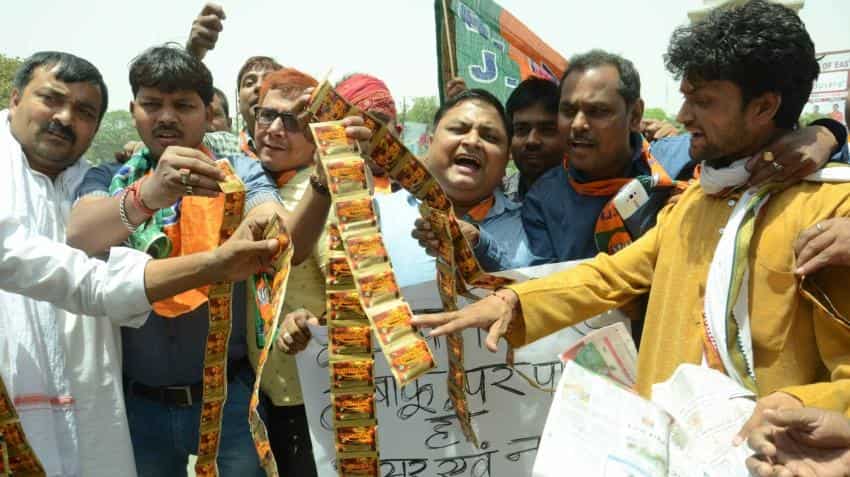 BJP workers stage a demonstration to press for ban on cigarette and chewable tobacco in Patna, on April 24, 2016. Photo: IANS
Written By: Collin Furtado
RELATED NEWS

This was according to information received from the Tobacco Board, Department of Commerce, the Flue Cured Virgina (FCV) tobacco used for manufacturing of Cigarettes for the last three years.

Apart from this, the Supreme Court in May had ruled that the pictorial warnings on cigarette packs was recently increased to 85% from 20% earlier. This even resulted in many cigarette companies such as ITC to shut production for a few days.

However, there are several farmers in the country who are dependent on tobacco crops for their livelihood. For this the government has implemented some steps to rehabilitate these farmers and help them shift to other crops.

“As per information received from Department of Agriculture, Cooperation & Farmers Welfare, Ministry of Agriculture, Crop Diversification Programme, an ongoing sub scheme of Rashtriya Krishi Vikas Yojana (RKVY) has been extended to 10 tobacco growing states w.e.f. 2015-16 to encourage tobacco growing farmers to shift to alternate crops/cropping systems. An allocation of Rs 2,500 lakh and Rs 3,000 lakh as central share has been made during 2015-16 and 2016-17, respectively to diversify tobacco farming in the states of Andhra Pradesh, Bihar, Gujarat, Karnataka, Maharashtra, Odisha, Tamil Nadu, Telangana, Uttar Pradesh and West Bengal,” said Jagat Prakash Nadda, Minister of Health and Family Welfare.