In PM Modi's electoral triumph, US sees an inspiration around the world

Lok Sabha election results 2019: Congratulating Prime Minister Narendra Modi on his re-election, the United States has said that the just concluded elections in India, the largest democratic exercise in human history, is an inspiration for people around the world. 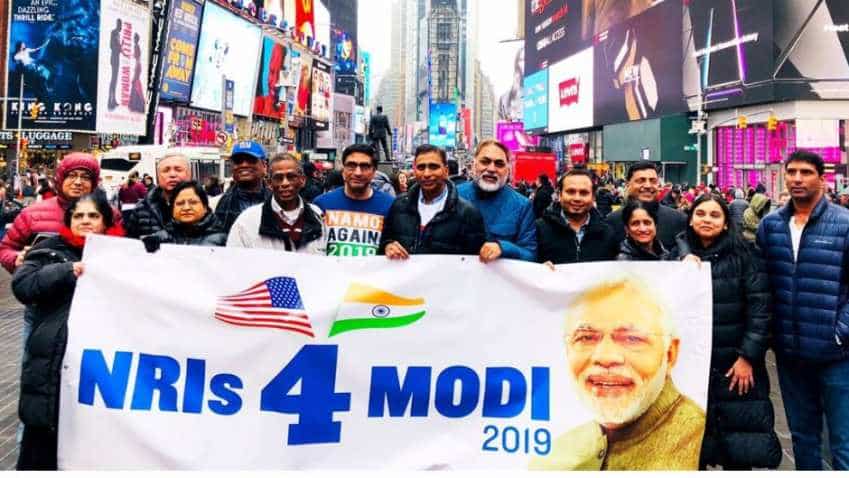 New York: Overseas Friends of BJP and NRIs4Modi at a rally in support of the BJP and Prime Minister Narendra Modi at New York''s Times Square in March, 2019. (Photo: NRIs4Modi Tweet)

"This was a strong display of the Indian people's commitment to democracy! We look forward to continuing to work with India for a freer, safer, and more prosperous region," he said. Secretary of State Mike Pompeo too took to Twitter to congratulate the prime minister. "Congratulations to @narendramodi and the NDA for their victory in India's election, and to the Indian people for casting their votes in such historic numbers. As the world's largest exercise in democracy, #India's election is an inspiration around the world," he said.
During an off-camera gaggle with reporters, State Department spokesperson Morgan Ortagus said India's elections are the world's largest exercise in democracy, a marvel of logistics and planning with 900 million people, an eighth of the world's population eligible to vote.

"We applaud the high turnout, estimated at around 66 per cent or roughly 600 million people, and the government of India for their excellent execution of this incredible event," Ortagus said.

India, she said, is a crucial partner for the US in many areas, especially counterterrorism. "We are certainly underscoring today a historic democratic movement of at least 600 million people voting. I think it is pretty amazing," Ortagus added. Indian American Congressman Raja Krishnamoorthi said it was truly an inspiration to see so many Indians exercise their democratic rights. "I look forward to working with PM Modi and the Indian government to strengthen the US-India partnership," he said.

One lesson from Modi's win is that dynastic, establishment candidates are weak, another Indian-American Congressman Ro Khanna said. "Democrats need to make sure that our candidate against Trump can connect with people's frustration and offer a positive vision for change," Khanna said. Several top American lawmakers too congratulated Modi and vowed to strengthen the relationship between the two countries.

"I look forward to working together to strengthen and expand the strong relationship between our two nations," Congressman George Holding, Co-Chair of the House India Caucus, said.

Senator Kevin Thomas congratulated Modi and said, "India and the US share a great relationship and looking forward to continuing cooperation going forward."

"Congratulations @narendramodi on your historic victory. Looking forward to seeing you soon," Senator John Cornyn tweeted. Congressman Pete Olson said he looks forward to continuing to work with him on issues critical to Houston, the US and India.

"The world's largest democracy and one of our strongest partners in the Indo-Pacific has chosen their leadership in free and fair elections," Congressman Ted Yoho said as he congratulated the BJP and Modi on the historic re-election.

Houston Mayor Sylvester Turner, in a congratulatory message, invited Modi to his city in Texas. "I would like to assure you of my commitment to continue strengthening relations between Houston and India, creating more business and trade opportunities, and improving the quality of life for all that call Houston home," Turner said.

Texas Governor Greg Abbott, in a handwritten message to Indian Ambassador to the US Harsh Vardhan Shringla, said that he viewed Modi's election as very important to the future of India.

"Texas looks forward to continuing working with you as we advance the economics of India and Texas," Abbott said.