Finance Minister Nirmala Sitharaman called for ‘concerted action’ to mitigate the disruption on account of synchronous slowdown and to invoke the spirit of multilateralism for global growth. 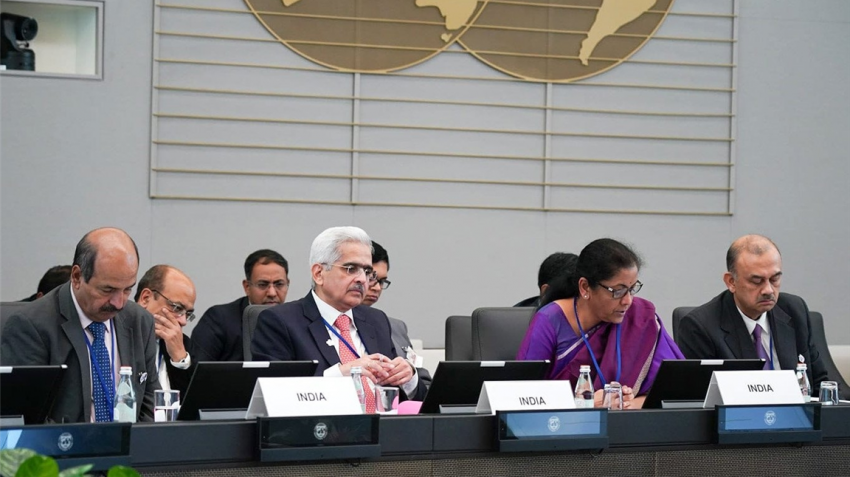 Sitharaman at the IMF - World Bank Annual Meetings 2019 has given a clarion call for ‘concerted action’ to mitigate the disruption on account of synchronous slowdown. Image source: IANS
Written By: ZeeBiz WebTeam
Edited By: Arun Kumar Chaubey
RELATED NEWS

Finance Minister Nirmala Sitharaman at the IMF - World Bank Annual Meetings 2019 has given a clarion call for ‘concerted action’ to mitigate the disruption on account of synchronous slowdown and to invoke the spirit of multilateralism for global growth. She also highlighted "the promising nature of a unified approach to the nexus and profit allocation challenges in developing a consensus solution to the tax challenges arising from digitalization," according to an official statement.

Sitharaman led the Indian delegation to the Annual Meetings Plenary session of the International Monetary Fund (IMF) and the World Bank Group held in Washington DC yesterday, and also attended the Working Lunch Session of the Development Committee (DC), the ministerial-level committee of the IMF and the World Bank.

In her intervention, the Finance Minister said that trade wars and protectionism have generated uncertainties that will ultimately impact flow of capital, goods and services. She called for ‘concerted action’ to mitigate the disruption on account of synchronous slowdown and to invoke the spirit of multilateralism for global growth.

Further, she said that the increased trade integration, geopolitical uncertainties, and high accumulated debt levels necessitate strong global coordination and that we need not wait for the slowdown to become a crisis.

FM Smt. @nsitharaman gives a clarion call for ‘concerted action’ to mitigate the disruption on account of synchronous slowdown and to invoke the spirit of multilateralism for global growth. For more details: https://t.co/t1vhsubP2o#IMFMeetings #WBGMeetings pic.twitter.com/JQuE8qvE1R

The 40th meetings of the International Monetary and Financial Committee (IMFC) of the IMF are being held at this year’s Annual Meetings. During the day, three sessions of the IMFC took place. The IMFC Introductory Session was focused on Global Developments and Prospects and the discussions centred on the World Economic Outlook released on October 15, 2019.

The Early Warning Exercise discussed upcoming risks to global economy and stability. A special session on IMF resources and governance was also held early in the day, in the context of the 15th Round of the quota discussions concluding this year. Secretary, Department of Economic Affairs, Shri Atanu Chakraborty, led the Indian delegation at this session.

Earlier on Friday, Sitharaman also led the Indian delegation to the G20 Finance Ministers and Central Bank Governors meeting in which the deliberations centred on international taxation and Stablecoins. The Ministers and Governors also took updates from the G20 Deputies on Quality Infrastructure Investment, Debt Sustainability, Financing for Universal Health Care and Building Effective Country Platforms, and from the Africa Advisory Group on the Compact with Africa (CwA) initiative.

On the discussions at the session regarding the work underway on developing a consensus solution on tax challenges arising from digitalization, She stated that a unified approach to the nexus and profit allocation challenges is a promising one that merits serious attention. A solution that is simple to implement, simple to administer and simple to comply with is needed.

Secretary , Economic Affairs, Atanu Chakraborty also held a few one-on-one meetings on the side-lines, meeting the Director General of the French Treasury, Renaud Basso; and the Chief Financial Officer of the World Bank, Anshula Kant. He also addressed investors in a session organized by JP Morgan.

Currently, the Finance Minister is on an official tour to Washington DC to attend the Annual Meetings of the IMF and the World Bank and other associated meetings.