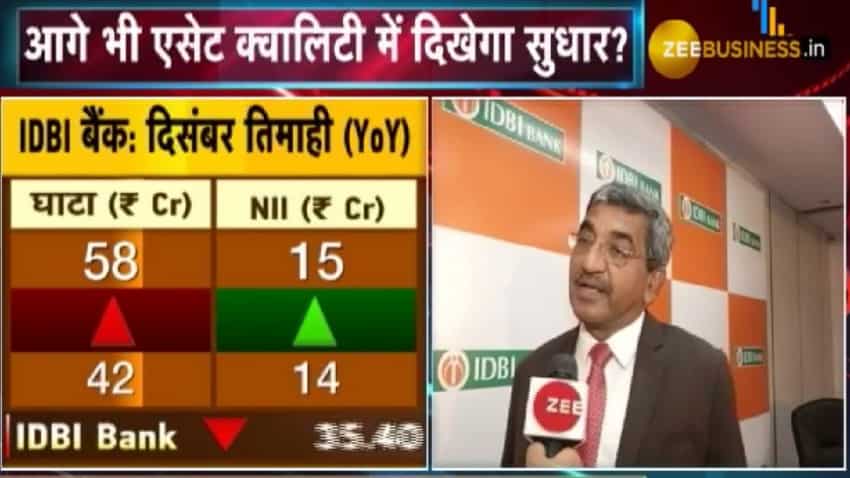 Big news for IDBI Bank investors! What is LIC going to do? Anil Singhvi clears the air about stake sale reports

Q: IDBI has reported its profit Before Tax (PBT) after a gap of 12 quarters. So, let us know about the factors that contributed to this?

A: There is an overall improvement in profit and we have been able to bring down our cost of the deposit. The bulk deposit has come down from 32% to less than 17%. This overall improvement in the bank has increased our efficiency. And, our operating profit has increased by 76%, and the net interest income has gone up by 13%, despite the advances hasn't gone up much yet, but it was supported by the adjustment of the cost of the deposit. In addition to this, recoveries from NPAs - which stands around Rs50,000 crore - has been a good one as almost 92% of our NPAs have been provisioned. So, the recoveries reaching us is added to the profit after removal of Part 1. So as we go forward, we hope that good recovery will reach us with time, which will also have a contribution to our profit.

Q: Can you provide the data on recoveries as well as fresh slippages of the quarter?

A: We have recovered more than Rs3,500 crores in the quarter of which Rs3,136 crore was recovered plainly, other Rs308 crore went to return of account and remaining went to the interest. As far as slippages are concerned then there was a slippage of around Rs2,100 crore of which around Rs1,300 crore belongs to two large accounts of which one was NBFC. If we remove them, then there is a slippage of around Rs800 crore. Now, I can't see any major slippages in the recent future and we will try to restrict it within Rs1,000 crore.

Q: The government in Budget 2020 announced that the government is planning to offload its 47% stakes in the bank. So, do you think that it will have any impact on the bank, if yes, then let us know about it?

A: The government has decided on it as it is an investor in the bank. But, if the government's decision signified that it is confident that the bank has been able to stand on its own. Interestingly, there is an improvement in the bank's performance as there is an increase in its profit. If we wouldn't have taken the tax reversal then our profit would have stood at Rs418 crore. This means the government is comfortable with us, which is a good decision as the bank has reached a position where it can stand at its own. But it is natural the investor, whosoever comes in place will just not be limited to a strategic investor but there can be retail investor, institutional investor and investors with good capacity, which means the bank's condition will improve further in the future. Apart from this, we are confident enough that we have reached a place where we can generate capital at our end as well as can also raise it from the market. So, chances are improvement is visible to us.

Big news for IDBI Bank investors! What is LIC going to do? Anil Singhvi clears the air about stake sale reports