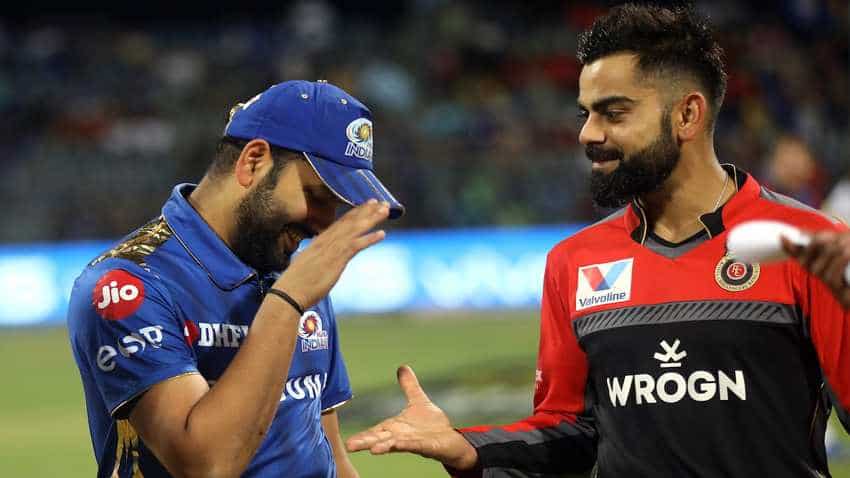 All the members of the team have lucrative Indian Premier League contracts, apart from the big money paid by BCCI. Source - IPL/Twitter.
Written By: Manas Tiwari
RELATED NEWS

The suspense finally ended on Monday as the national selection committee, led by MSK Prasad, announced a controversial yet strong 15-man side for the upcoming ODI World Cup in England and Wales. While most members of the side picked themselves, Tamil Nadu all-rounder Vijay Shankar pipped Ambati Rayudu for the number four slot while the experienced Dinesh Karthik was preferred over the dynamic Rishabh Pant as the second wicket-keeper behind MS Dhoni. The selectors also opted for Ravindra Jadeja in place of a fourth seamer, considering that the wickets in England will be on the slower side this time of the year.

The squad is full of stars and even as most nations are yet to announce their teams, they are unlikely to beat the stardom of this India side. All the members of the team have lucrative Indian Premier League contracts, apart from the big money paid by the Board of Control for Cricket in India (BCCI) in annual contracts. Not to forget, the lucrative brand endorsements most players have. Here is a closer look at how much money the Indian cricket team stars earn -

1. Rohit Sharma - The limited overs' vice-captain is only one of the three players to be in BCCI's top grade. He is entitled to an annual remuneration of Rs 5 crore, apart from the Rs 15 crore contract by the Mumbai Indians. Rohit also endorses many brands that add to his wealth.

2. Shikhar Dhawan - Rohit's opening partner Shikhar Dhawan left the Sunrisers Hyderabad for Delhi Capitals as the former failed to meet his financial expectations. Shikhar has an IPL contract worth Rs 5.20 crore and gets Rs 5 crore from BCCI as annual remuneration, taking his overall salary to Rs 10.20 crore.

3. KL Rahul - The stylish Karnataka batsman who has been picked as a back-up opener was the most expensive Indian batsman in last year's IPL auction, sold for Rs 11 crore to Kings XI Punjab. He is in the third grade contract by BCCI and is paid Rs 3 crore for his services.

4. Virat Kohli - The Indian skipper is the most expensive player in the IPL history and was retained by the Royal Challengers Bangalore for whopping Rs 17 crore. He is also in the top BCCI grade with Rs 7 crore remuneration. Kohli's is a hot property among brands and endorses many big names.

5. MS Dhoni - Despite only playing limited overs' cricket for the last few years, MS Dhoni remains hot property and endorses brands like Dream11 and redBus. He was retained by Chennai Super Kings for Rs 15 crore and was given Rs 5 crore contract by the BCCI.

6. Kedar Jadhav - The all-rounder might have been given just Rs 1 crore contract by the BCCI, he has a lucrative IPL contract by Chennai Super Kings. Jadhav was bought for Rs 7.80 crore by the yellow uniformed outfit.

7. Vijay Shankar - A late bloomer and last-minute entry to India's world cup squad, Shankar is the only player on the plane to England without a BCCI contract. The all-rounder, however, is set to earn Rs 3.2 crore for his six-week stint with the Sunrisers Hyderabad during the IPL.

8. Hardik Pandya - One of the most important members of the side, Hardik could be a difference between India posting 280 or 320 at the marquee tournament. He was retained for Rs 11 crore by the Mumbai Indians and is paid Rs 3 crore by the BCCI.

9. Kuldeep Yadav - If Kuldeep Yadav's performance in last year's England tour is to go by, he can play an important role in India's campaign. The left-arm chinaman bowler earns Rs 5 crore from the BCCI and was bought by the Kolkata Knight Riders for Rs 5.8 crore.

11. Bhuvneshwar Kumar - The leader of India's pace attack, Bhuvneswar Kumar has a Rs 5 crore contract from the BCCI. He was retained by the Sunrisers Hyderabad for Rs 8.50 crore, making him one of the most expensive Indian bowlers in IPL.

12. Mohammed Shami - The Kings XI Punjab pacer has made a dramatic comeback to the national setup before spending last three years in exile. Shami has been on a roll for the last six months and was given Rs 5 crore contract by the BCCI. He was also sold to Punjab for Rs 4.8 crore in this year's IPL auction.

13. Jasprit Bumrah - The Mumbai Indians fast-bowler is to Indian bowling, what Kohli is to batting. The BCCI acknowledged his performance by placing Bumrah in the top grade alongside Virat Kohli and Rohit Sharma. He was also retained by the Mumbai Indians for Rs 7 crore.

14. Ravindra Jadeja - The all-rounder gets Rs 5 crore from the BCCI for his services and was retained by the Chennai Super Kings last year for Rs 7 crore.

15. Dinesh Karthik - A lot has been said about Dinesh Karthik's selection before and after the announcement of the team, but the KKR skipper did everything to deserve a seat on the plane. He was bought by the Knight Riders for Rs 7.4 cr and gets Rs 1 crore from the BCCI.