Prime Minister  Narendra Modi has gained a whopping 10 million followers in less than a year, taking his follower count to 60 million. 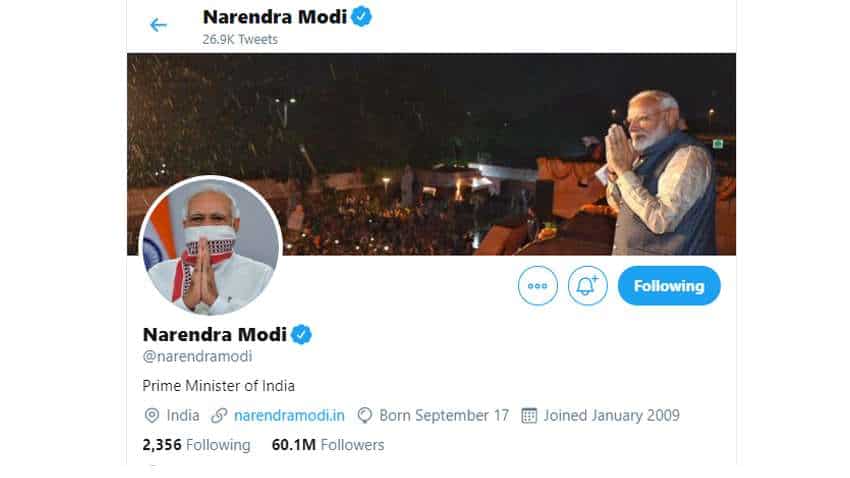 Known for his huge social media presence and following, Prime Minister Narendra Modi has reached 60 million followers on Twitter. This whopping figure makes him one of the most followed individuals across the globe. With just former US President Barack Obama and current US President Donald Trump ahead of him, PM Narendra Modi is the third most followed world leader on Twitter.

Prime Minister  Narendra Modi joined the micro-blogging site way back in January 2009 when he was serving as the Chief Minister of Gujarat. However his popularity soared after he took charge at 7, Lok Kalyan Marg as India's Prime Minister in 2014.

He uses this platform to communicate with not just other world leaders but fellow Indians, informing about his address to the nation or policy decisions like the recent economic package for 'Atmanirbhar Bharat'. More or less all his public addresses are beamed live on Twitter for all to watch on the go. He also occasionally responds to fellow twitterati, when they tweet tagging him.

Unlike other Indian politicians, PM Modi uses every aspect of Twitter to communicate. Recently, he changed his display picture with a 'gamcha' wrapped around his face to communicate a message for the importance of using masks during this coronavirus pandemic, to his then nearly 60 million followers. Earlier, PM Modi used the prefix "Chowkidar" to his Twitter name to suggest he guards the nation's resources as a "chowkidar".

Modi who has been insisting upon increasing use of the digital medium India, has also been active on other social media platforms like YouTube, Facebook and Instagram as well, where too he has a growing following. On Instagram, where he posts his photos and short videos, he has 45.3 million followers. On Facebook and YouTube, he has 45 million and 6.92 million followers respectively.