How central forces saved 1050 lives onboard Mahalaxmi Express in Mumbai

Two military helicopters and six boats of the NDRF were pressed into action as officials used the social media to release timely updates. The rescued passengers were moved to Kalyan by road, provided food and shelter, said officials. 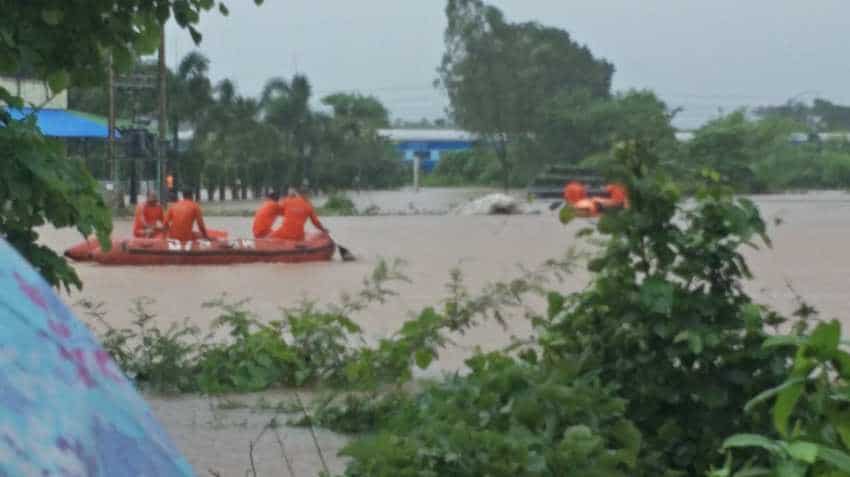 Mahalaxmi Express was stranded near Badlapur and Vangani due to massive waterlogging and floods in Thane district. The rescue mission was in full swing yesterday with Navy and NDRF taking charge. Several teams of NDRF, Indian Army and the Indian Navy were pressed into action and local administration worked in clock precision after hours of effort, to rescue 1,050 passengers. The passengers were moved to safer places and later a special train was arranged for them.

Two military helicopters and six boats of the NDRF were pressed into action as officials used the social media to release timely updates. The rescued passengers were moved to Kalyan by road, provided food and shelter, said officials.

Due to heavy rainfall compounded with overflowing of Ulhas river resulting in water logging at Ambernath. The problem started intensifying after 11 pm when the railway authorities realised that heavy rains were hitting the Kalyan-Karjat belt, said officials. Nearly four hours later, they sent the alert to the state government.

Around 8 am, the first rescue team reached the spot, while NDRF joined the operation at 9.43 am. NDRF Director General SN Pradhan said their primary focus was women and children – there were nine pregnant women on board. They then began rescuing the elderly before moving on to male passengers.

Reportedly, there were nine pregnant women on board. The RPF and the police delivered food packets to the passengers and rescued the passengers. Later a special 19-coach train left from Kalyan to Kolhapur with the affected passengers.

The Home Ministry explained the entire operation in an official statement.

Take a look:
Mahalaxmi Express, which runs between Mumbai and Kolhapur, was held up between Badlapur and Wangani railway station due to water logging on tracks with nearly 900 passengers and staff since this morning.

On getting the information about this incident around 8.50 am, Ministry of Home Affairs (MHA) immediately deputed 02 team each of National Disaster Response Force (NDRF) from Mumbai and Pune along with 09 boats and other necessary rescue equipment and NDRF teams reached the spot at about 0940 hrs. At the same time on the request of MHA, Ministry of Defence (MoD) immediately deployed Navy and Airforce teams for the rescue operation.

Ministry of Railway also mobilized all necessary resources including a relief train and also provided medical assistance and refreshment to passengers.

In spite of fully water logged roads, tough and undulating terrain, NDRF and Navy teams evacuated all the stranded passengers and railway staff safely from the train.
Situation was closely monitored by the Union Minister for Home Affairs, Shri Amit Shah. He  and MoS Home Affairs, Shri Nityanand Rai complimented the efforts of MHA, NDRF, MoD and other agencies for successfully rescuing all the passengers in the shortest possible time.

Further arrangement for a special 19-coach train have been made by the Indian Railways for movement of passengers upto Kolhapur.