In the next six years, Jaitley tweeted on a variety of subjects that were close to the hearts of millions of people. In one of his tweets, he said, "From gloom & doom driven by policy paralysis of the UPA, we have made India in the last 5 years the fastest growing economy in the world." 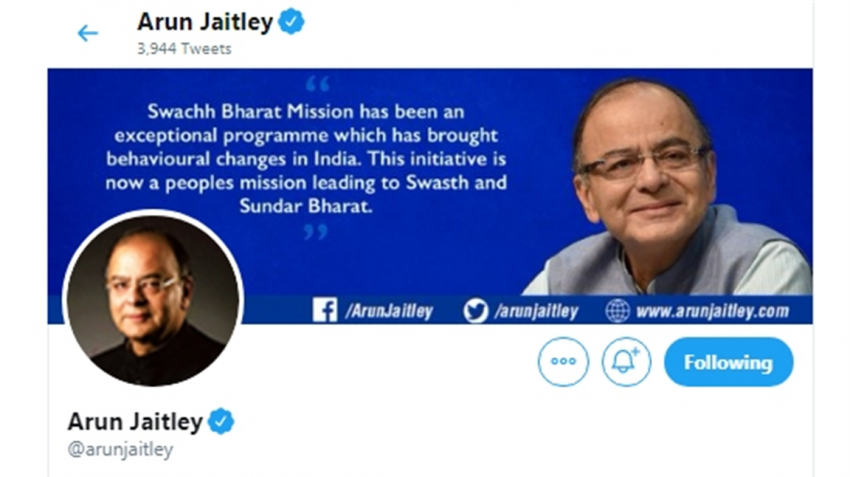 He, however, was never part of unnecessary mud-slinging on opposition leaders and tried to stick to facts while sending out posts. Image source: IANS

Former finance minister Arun Jaitley, who joined Twitter in November 2013 had 15.3 million followers on the day of his demise, used the micro-blogging platform to connect with the masses. He garnered over 3,000 followers in just hours of signing up on Twitter on November 27, 2013. Arun Jaitley's first tweet came on December 5: "It gives me great pleasure to join this vibrant forum for sharing my views and interacting with you all".

In the next six years, Jaitley tweeted on a variety of subjects that were close to the hearts of millions of people. In one of his tweets, he said, "From gloom & doom driven by policy paralysis of the UPA, we have made India in the last 5 years the fastest growing economy in the world."

He, however, was never part of unnecessary mud-slinging on opposition leaders and tried to stick to facts while sending out posts. Once he tweeted, "We envision four priority areas for expenditure in New India - national security, health, education & infrastructure development."

Jaitley always tweeted in both English and Hindi to have a wider reach. During his active Twitter life, he was always to-the-point, and avoided getting into controversies, even during the heated social media debates on demonetization and GST. His tweets may have fallen silent, but his followers will always remember him as someone who kept a clean social media profile.

Despite his prolonged illness, Arun Jaitley always took part in the political discourse. He continued tweeting. His last tweet came on August 7 when he paid his tributes for Tulsidas Jayanti before tweeting how heartbroken he was at the demise of his cabinet colleague Sushma Swaraj, who passed away at the AIIMS following a cardiac arrest on August 6.

But his series of tweets on August 6 on the abrogation of Article 370 proved how much he missed politics. Although he was away from the action, owing to his critical health condition, Jaitley congratulated Prime Minister Narendra Modi and Home Minister Amit Shah for axing Article 370,

In a thread of 10 tweets, the ailing Jaitley said, "Prime Minister Shri Narendra Modi and Home Minister Shri Amit Shah achieved the Impossible with the new Kashmir policy. In my blog today, I have analysed the impact of this decision, and history of failed attempts on resolving the J&K issue."

Elaborating on the way J&K was heading, Jaitley said, "The J&K history of the past seven decades shows that the journey of this separate Status has been towards separatism and not integration. It created a separatist psyche. Pakistan was more than enthusiastic in trying to exploit the situation."

Delving into the history of militancy in the valley, Jaitley said, "By 1989-90, the situation of J&K had gone out of control and separatism with terrorism picked up. Kashmiri pundits, an essential part of Kashmiriat, suffered such atrocities which only the Nazis had inflicted in the past. The ethnic cleansing took place and they had to move out."

Jaitley continued, "The historic blunders of special status had cost the country politically and financially. Today, when history is being re-written, it proves that Dr. Syama Prasad Mookerjee`s vision on Kashmir was the correct one and Panditji`s dream solution has proved to be a failure."

"In the last seven decades, attempts to resolve the issue proved a disaster, PM Modi decided to follow an alternative approach. The present decision makes it clear that just as the rule of law prevails in other parts of the country, it will equally prevail in the Kashmir valley," read another tweet.

On the changing Kashmir, he tweeted, "The last ten months have not seen any protest. Not even in Srinagar. Law and order enforcement, making life safe for lakhs of Kashmiris and pressuring handful of separatists and terrorists has been at its best. The next logical step obviously is total integration of the State."

Taking a dig at the Congress, he tweeted, "The decision to reverse the situation created by Panditji needed clarity, vision and determination. It also needed political courage. The Prime Minister has created history through his absolute clarity and determination."

His attacks on the Congress continued, "India`s most beautiful State has not had investments from even the hotel chains. Consequently, there are no new jobs, no revenue for the State. These constitutional provisions are not cast in stone. They had to be removed/diluted through the due process of law that is done now."

"The level of support has compelled several opposition parties to support this move. They sensed the ground reality and do not want to face the wrath of the people. Regrettably, the Congress Party legacy, which first created the problem and then added to it, fails to see reason."

The ailing Jaitley ended the Twitter thread saying "Congress Party, as a `headless chicken,` is further consolidating its alienation from the people of India. The New India has changed. Only the Congress does not realise this. The Congress leadership is determined to succeed in its race to the bottom."

These last 12 tweets will be the embodiment of how unstoppably full of life and conviction Arun Jaitley was.