Housing for All: Housing and Urban Affairs Hardeep Singh Puri has announced that his ministry is all charged up to meet the target two years in advance. 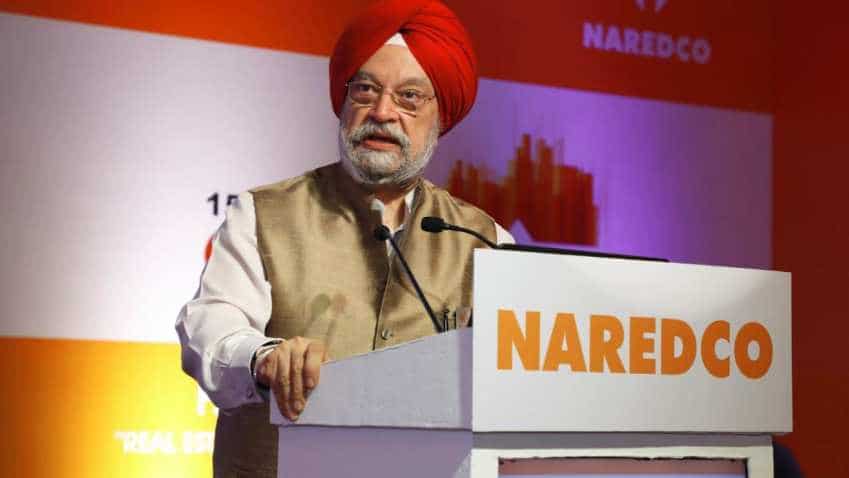 The MoHUA has held consultations with the states, during which some concerns have been expressed, but several positive suggestions to have come up. Photo: Courtesy NAREDCO
Written By: Asit Manohar
Edited By: Harish Dugh
RELATED NEWS

Housing for All: The mega mission of the Narendra Modi government to provide a roof over the head of each Indian household by 2022 is a highly ambitious agenda that faces formidable challenges but Minister of State (I/C) for Housing and Urban Affairs Hardeep Singh Puri has announced at the  National Real Estate Development Council’s (NAREDCO) 15th National Convention that his ministry is all charged up to meet this target two years in advance, that is, by 2020. Puri also made a significant point that while in the Congress-ruled, urban rejuvenation programmes received a sanction of Rs 1,50,000 crore, in the present dispensation’s rule this figure has gone up by six times. Soon out of 100 Smart Cities announced, the government will be able to roll out 50 smart cities by December 2019, he revealed.

“The 2022 target of a pucca home with basic facilities in the name of the lady of every household in the country will be achieved two years in advance. To achieve this target, we need deep involvement of all stakeholders and I compliment NAREDCO for lending their support to the government to make this dream project a reality in the times to come,” Hardeep Puri stated. The Housing and Urban Affairs also apprised the gathering about the progress made by the government on the front of formulating rental housing policy adding, “The MoHUA has held consultations with the states, during which some concerns have been expressed, but several positive suggestions to have come up.”

The MoS (I/C) spoke highly of  Prime  Minister Modi as the first PM to embrace urbanization,  and accord it a high priority.  As per an estimate, more than 600 million people be will live in cities by 2030, the time when India also needs to meet the UN agenda of SDGs. “ We are confident to abide by the 2030 sustainable development goals agenda well before 2030,” the minister exuded confidence. He pointed out that RERA has removed many aberrations in the real estate sector. The cleanup process has been started. RERA has been a resounding success, but since it’s two-year-old legislation, we should not expect it to solve all problems at one go.  We are in the process of streamlining RERA procedures further. But by and large, the regulator has come to be accepted by all stakeholders, he added.

Speaking on the occasion Rajeev Talwar, Chairman, NAREDCO praised the minister for his path-breaking measures. Talwar assured that the real estate sector will extend complete support to the Modi government in meeting its goal of transition to 5 trillion economies.

Shah Rukh Khan: I realised how short I am while shooting with Amitabh Bachchan