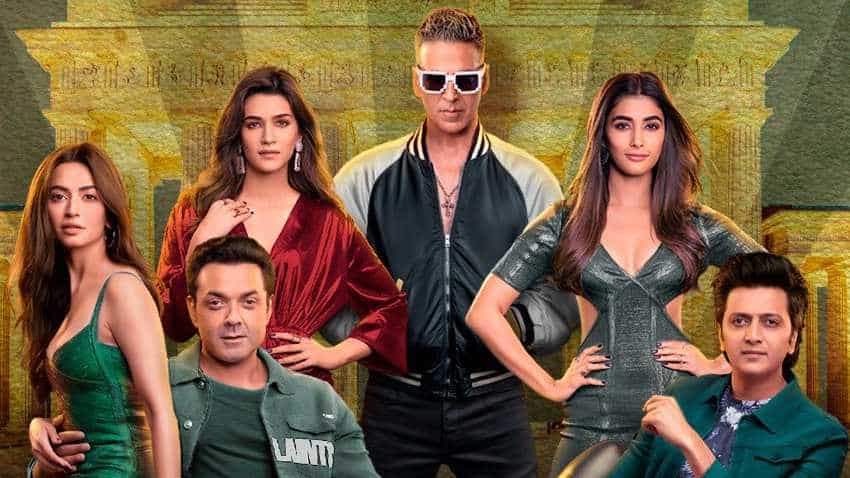 The actor is expected to take the box office by storm this Diwali with the release of Housefull 4. Source - Akshay Kumar/Twitter.
Written By: ZeeBiz WebTeam
Edited By: Harish Dugh
RELATED NEWS

Housefull 4 box office collection prediction: Akshay Kumar is at the peak of his career, generating box office hit after hit, while drawing praise from critics as well. The actor is set to return to the big screen this Friday with the release of Housefull 4 that also stars Riteish Deshmukh, Kriti Sanon, Bobby Deol and Chunky Pandey, among others. If the strong buzz around the film is anything to go by, he is set to beat Rajesh Khanna's record of 17 consecutive box office hits that has remained untouched for almost 47 years.

The actor is expected to take the box office by storm this Diwali with the release of Housefull 4. The is even expected to challenge War as the most successful movie of 2019. However, Film trade analyst and critic Sumit Kadel has confirmed that the film has had poor advance bookings till now. He expects it to pick up leading up to Diwali. "Advance booking of #Housefull4 is poor till now, expecting advance sale to escalate from tomorrow (Wednesday), full fledge shows allocation yet to begin at plexes," Kadel tweeted.

The only other actor who is close to achieving the feat is Salman Khan. He has delivered 14 box office hits till now including Dabangg, Ready, Bodyguard, Ek Tha Tiger, Dabangg 2, Jai Ho, Kick, Bajrangi Bhaijaan, Prem Ratan Dhan Payo, Sultan, Tubelight, Tiger Zinda Hai, Race 3 and Bharat. With Dabangg 3 and Radhe set to release over the next eight months, the actor should take his tally to 16.

Meanwhile, there is a chance that Akshay might take his streak past 20 with Good News and Sooryavanshi appearing to be sure shot hits.