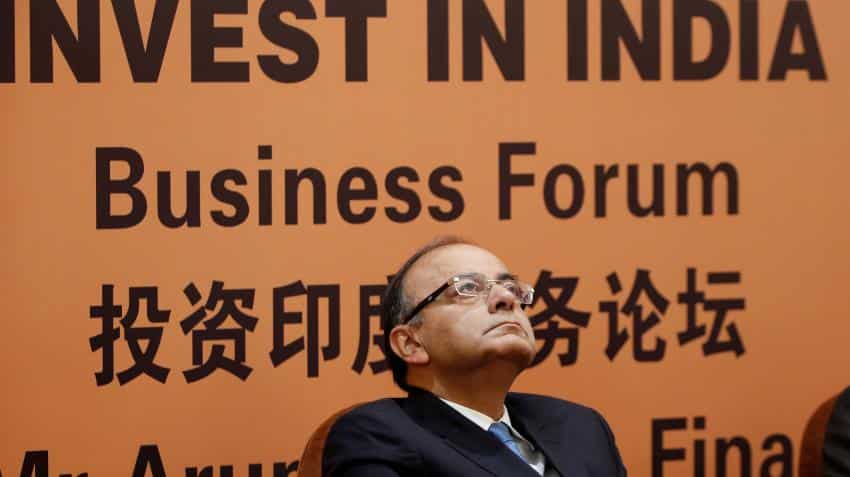 The all-powerful GST Council, which has been deadlocked in the past few meetings, will meet on January 16 to discuss the issue of jurisdiction over assessees as well as taxation of trade in territorial waters. Image Source: Reuters
Written By: PTI
RELATED NEWS

With states and the Centre still locked in stalemate over control of tax payers, Finance Minister Arun Jaitley today said the issue will be resolved in next few weeks for rollout of the GST regime from April 1.

The all-powerful GST Council, which has been deadlocked in the past few meetings, will meet on January 16 to discuss the issue of jurisdiction over assessees as well as taxation of trade in territorial waters.

"Most of the issues have been sorted out, some critical issues remain and these critical issues over the next few weeks we will try and solve out," he said addressing the Vibrant Gujarat Global Summit here.

Goods and Services Tax (GST), which is to subsume most of the central and state taxes like excise, service tax and VAT, needs to be rolled out latest by September 16, 2017, he said.

Under the Constitutional Amendment passed by Parliament for the GST implementation, some of the existing levies would expire after September 16.

Jaitley said the government was aiming to implement the new sales tax from April this year. "We would want it to be implemented from April if all issues are resolved."

Once implemented, he said, GST combined with more digitised economy resulting from currency demonetisation and a more efficient tax system will "make India look much better, make our economy look much cleaner, much bigger".

He hoped that the industry, assessee and states will eventually cooperate and make GST as well as the two moves successful.

GST and demonetisation together will lead to "higher revenues in future, greater compliance and give us a cleaner and better economy," Jaitley said.

"There is a provision for GST implementation because Constitutional Amendment has been passed. So it's Constitutional necessity that before September 16 it should be rolled out," he added.

GST, or a national sales tax, will replace a jumble of levies to create one of the world's biggest single market. A single tax will make it easier to do business in the world's seventh-largest economy as also help combat evasion, boost revenue for the government.

But the roll out is struck because of differences between the Centre and states over control and administration of the tax as also on how the states that face revenue shortfall because of the GST roll out would need to be compensated.
Jaitley said he hopes to resolve the issue of dual control of tax payers at the next meeting of the GST Council on January 16.

"We would want it to be implemented from April if all issues are resolved. But implementing before September 16 is a necessity," he said.

The Finance Minister said the digitisation that got a leg up post demonetisation of old Rs 500 and Rs 1,000 notes, together with GST will lead to expansion of formal economy and boost growth.

"The two steps together will lead to a larger economy and a cleaner GDP. I am hopeful that we will see the two this year," he said.

Jaitley said GST council is a body where there is deliberative democracy in action. "It is India's first federal taxation body where all these are now being worked out."

It took a considerable amount of effort to build consensus to pass the GST constitutional amendment, he said.

GST will make India one entity and lead to a seamless transfer of goods and services across the country, he said.

"It is advantageous to the assessee as there is no cascading of tax. His goods can move around, he gets the benefit of input credit and it's good for states as it eventually leads to larger revenues and it's good for the economy as a whole," Jaitley added.