Rajiv Kumar, Vice Chairman, NITI Aayog, talks about the transformative steps taken in the Union Budget 2021-22, steps taken to encourage investments in India, China Plus One strategy and what the budget has for the common man among others during an exclusive interview with Swati Khandelwal, Zee Business. 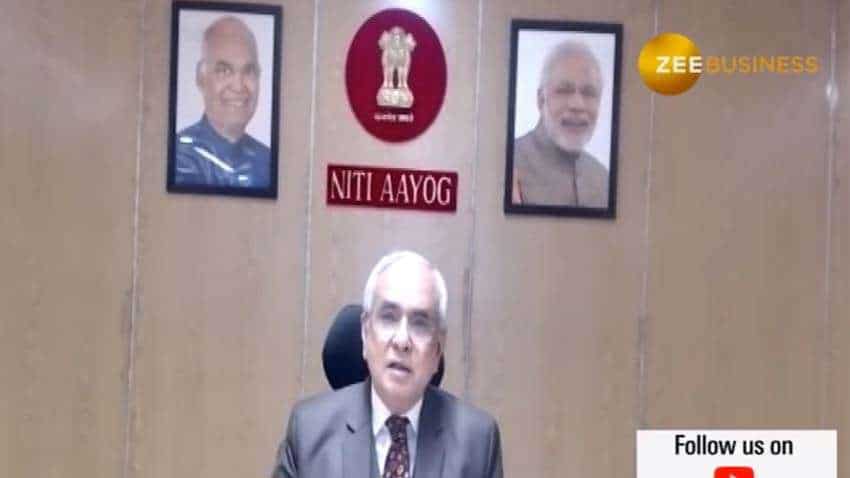 Rajiv Kumar, Vice Chairman, NITI Aayog, talks about the transformative steps taken in the Union Budget 2021-22, steps taken to encourage investments in India, China Plus One strategy and what the budget has for the common man among others during an exclusive interview with Swati Khandelwal, Zee Business. Edited Excerpts:

Q: Congratulations! Budget 2021-22 is beyond the expectations. Tell our audience about the transformative things about the policies that have been announced in the budget?

A: The biggest thing in the budget is related to the Capital Expenditure, which is always low and is not increased, has been increased by 34% this year compared to the last year. As a result of this, the capital expenditure, which used to be in a range of 12-14% of the entire expenditure till now, has increased to 16%. And, this capital expenditure that will go into the infrastructure - and it has been told the way it will go into highways, railways, urban transport and ports among other - will help in ending the infrastructure deficit problem that our corporate world always had. Secondly, it has multiplier effects, which will benefit other sectors as well. This is a big thing. With this increase you, I would like to say, the off the budget items, like food subsidy that came from National Small Saving Fund (NSSF) has been included in the budget. So, it has been included in the fiscal deficit that stands at 6.8% but it was not present in it. So, our fiscal deficit has been kept at the almost same level, but the quality of the expenditure has improved greatly. This is a big thing. Apart from this, there are few things, which were believed that this can never happen now, no government can do it. In this, for the first time, it has been announced that two public sector banks and one general insurance company will be privatized and LIC will be listed, its IPO will be launched. It breaks the barrier, i.e. it is a situation that the Holy Cow is being eliminated, this is a big thing. Thirdly, in the insurance sector, the FDI has been raised from 49% to 74%. The big thing about this budget is, to find ways to improve the sentiments of the private sector and the private investors and provide more opportunities and space to invest and take forward the economy.

Q: When we talk about the policies and India is considered as a destination where policies are framed but there are issues related to its implementation, which creates problems for the investors. The good thing is that the government has recognized it but do you think that there will be any improvement in it and big names have the confidence and are ready to come to India?

A: There are two-three things on it. As you talked about the implementation and we have seen the problems associated with it during privatization and disinvestment. In the last 2-3 years, we saw that a target was announced but we were not able to complete them. But this time for the first time, the finance minister has described the asset monetization pipeline and the area where it will happen and the level to which it will be done. Not only this but, she has also talked about making its dashboard and it will have real-time monitoring. For asset monetization and disinvestment, she has named the eight units where it will happen, and I know that a lot of work has been done in it. And, then of land monetization and it has a target of Rs 1.75 lakh crore, and I feel that it will be achieved. The government is committed in this. The second thing is that there were the talks related to tax harassment to investors in which there were talks that the old cases will be opened, and it will be resolved in a tribunal. But this time, you would have seen that she has announced that the cases where deviation stands below Rs 50 lakh then only three-year-old income tax cases will be opened not of 10 years that was happening earlier. Apart from this, she said this is going to be a faceless assessment, which will be online. Till date, it was limited till appellate but now, it will be faceless till the tribunal. This means the investors and the corporate world will not have to face such a situation and their harassment will come to an end. Also, in the case of small units, she said that they will not have to undergo a tax audit if they have revenue up to Rs 5 crore, earlier, it was restricted to Rs 1 crore. The last thing is related to income tax returns, where maximum things will get automatically filled - the profile will be filled automatically. They will get the data from some other places and auto-fill those, which means there will be no need for you to fill those spaces. So, these are the things under which ease of business of the investors have been kept in mind and it is trying to make India a good destination.

Q: The government has big plans including manufacturing almost everything in India and provide it to the world and an opportunity has been identified during the COVID, i.e. why we should not emerge as China Plus One for the world. So, tell us about the kind of policies that would be finalised in the coming future?

A: First of all, I would like to talk about the production linked incentive (PLI) scheme that involves 13 sectors. It has been launched in three sectors, while the Cabinet has decided on the other 10 sectors, where the scheme will be launched. For the purpose, they have also fixed a big amount of Rs 1,47,000 crore. In the next five years, people who will invest in these areas - which is globally comparative and is of a global scale - will be provided with this amount in form of fiscal incentive. So, a program has been prepared and the respective ministries in these 10 sectors are working, I am aware of it. In the next few days - as the cabinet decision has been made on it, now, it is just a matter of procedure - these policies will be implemented, and they will emerge. In these 13 sectors, we expect a manufacturing investment will come. The policy has been prepared for China Plus One, under which anyone shifting to India from China will get a good place to work. Landbank is related to it and I know that DPIIT is working to make sure that it gets land at an ease. Apart from this, you were talking about manufacturing and in that, you would have heard about the Small and Medium Enterprises (SMEs) and their revenue has gone up to Rs 250 crore, which was low earlier. So, things have changed, which means work has been done and further work will be done in it. I intended to say that for the first time in the budget, there has been the announcement of those things where the government has already worked, it is not so that it will start working from now onwards and do not know how long it will take. So, this is a big thing, I think, you will see that very soon these things happening on the ground and progressing them.

Q: There have been talks related to unemployment and the creation of employment opportunities although the government has been working on it. If the budget is seen from the lenses of a common man than what the budget had for the middle-class people and people are saying that we are honest taxpayers, and it would have been better if the government would have given some money in our hands. What would you like to tell them and how will you explain this budget to them for whom employment is important and having money in hands is also important?

A: First of all, we should understand the meaning of the common man and it is just limited to the six to six and a half crore taxpayers or it also includes another 100-crore people of which around 40% are below the poverty line. But, the biggest need for both of them, in fact, every class, is the generation of employment opportunities because our young people- young men and women - need employment at this point. And, employment will not happen until our economic pace does not increase and investment does not increase, especially the private investment will not increase. By paying attention to the same, the budget has focused on the ways to increase the economic pace and private investment and in those areas, for instance, you saw seven textile parks were talked about. Talks related to integrated textile parks happened and when the garment units will set up in it and more textile units will come there then it will increase our exports, which in return will increase the employment opportunities. So, I would like to say to the common man that this is a budget to increase employment and you will benefit more. Secondly, I greatly appreciate the contribution of all those taxpayers because this is a very big thing and due to that we can run the country. But they should have little patience in this odd situation because - at this time the condition of our economy or the state of the global economy is - reduction of the taxes would have been difficult, at least, when the fiscal deficit stands at 6.8%. If we would have reduced the taxes further than it would have created troubles for us. At the same time, I would like to say that we are working to reduce their compliance burden so that they can file their income tax returns at an ease without any harassment. In the same, senior citizens above 75 years have been allowed to not file their income tax returns, which is a big step. So, I would say that we all together should move forward on the path of growth and boost our economy, which will definitely benefit each one of us in the coming years.