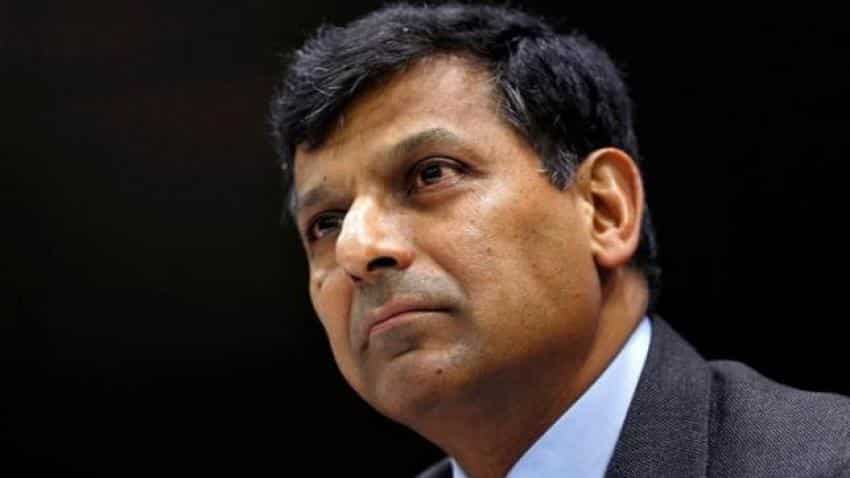 Rajan said he will not take up second term and he will return to academia when his current term ends on September 4. Photo: Reuters
Written By: ZeeBiz WebTeam
RELATED NEWS

RBI Governor Raghuram Rajan on Saturday said no to the second term as the head of the central bank.

After months of speculations, Rajan said he will not take up second term and he will return to academia when his current term ends on September 4, he said in a message to central bank staff.

As the news spreaded, the economists, industrialists and top entrepreneurs shared their views on Rajan's exit. For some, the news was a "shock" while some hailed Modi government for his exit.

Here's what how they reacted:

Finance Minister Arun Jaitley on Twitter: “The Government appreciates the good work done by him and respects his decision. A decision on his successor would be announced shortly.”

Dr. Raghuram Rajan has announced his intention to go back to academics at the end of his current assignment.(1/2)

The Government appreciates the good work done by him and respects his decision. A decision on his successor would be announced shortly.(2/2)

Lawmaker Subramanian Swamy -- the Modi ally who’d been seeking Rajan’s dismissal, claiming he’d kept interest rates too high and stifled growth -- on Twitter: "My admiration for Namo has gone up hugely. Media, industrialists, and international bureaucrats piled on him for R3, but he did not bend." Swamy was using "Namo" to refer to Modi and "R3" for Rajan.

R3 has said he will go back to US. Whatever figleaf he wants for hiding the reality we should not grudge it. Say good bye!

My admiration for Namo has gone up hugely. Media, industrialists, and international bureaucrats piled on him for R3, but he did not bend

Rahul Gandhi, a leader of the opposition Congress party, on Twitter: "Prime Minister Narendra Modi knows everything. He has no need for experts like Raghuram Rajan."

Prime Minister Narendra Modi knows everything. He has no need for experts like Raghuram Rajan

Palaniappan Chidambaram, former finance minister under the previous government, in a statement: “The government had invited this development through a craftily planned campaign of insinuations, baseless allegations and puerile attacks on a distinguished academic and economist. As I had said some time ago, this government did not deserve Dr. Rajan. Nevertheless, India is the loser.”

Harvard University Professor Lawrence Summers: "Ragu Rajan will be missed. He is one of the few central bank governors who has changed the regime in a major country. This is a major accomplishment. I hope very much for the sake of India and the global economy that his policy innovations are a foundation for what is to come."

Vikas Khemani, chief executive officer at Edelweiss Securities Ltd. in Mumbai. CNBC-TV18 tweets that Khemani says Rajan’s exit will not be a major setback for the market and that the next governor will also do a good job.

Tirthankar Patnaik, economist at Mizuho Bank Ltd., by phone: “This is a negative surprise for India. In India’s impending macro scenario, Rajan’s presence would have been really, really important. Without him, things are likely to be much more difficult.

State Bank of India’s Chairman Arundhati Bhattacharya in an e-mailed statement: "Dr. Rajan is a person of very high caliber, who has built ably on the reputation of our central bank and given it a very large measure of credibility."

Former CEO and chairman of the Royal Bank of Scotland in India, Meera Sanyal tweeted: "Academia's gain is India's loss : Gov Rajan to return to Chicago on Sept 16. Swamy gets his way at the cost of India."

The way Rajan has been attacked will forever remain a black mark on Modi Govt's visage...R Jagannathan in Swarajya https://t.co/qgvZgFcwE8

Housing Development Finance Corp. Chairman Deepak Parekh to BloombergQuint: “I don’t think it’s going to make a big difference -- that money is going to start going out because the governor has stepped down.”

Narayan Murthy, Co-Founder of Infosys, who had pitched for at least two more terms for Rajan, expressed sadness over the development and said Rajan deserved more dignity than what he was treated with.

Mohandas Pai said in a tweet that it is a "very sad day for us great talent driven away by alcontents,cronies...deeply concerned."

Mahindra & Mahindra Ltd. Chairman Anand Mahindra, cited by PTI: "In my travels around the world and encounters with leading overseas businessmen it became clear that during his tenure he greatly enhanced the credibility and bankability of India. I trust that a successor will be found who will continue and enhance the great work done by Governor Rajan.”

"He has always been keen on academia. But having said that I do hope that we will have a leadership in RBI soon which would do the very very outstanding work that Rajan had started," Seshasayee added.

The Associated Chambers of Commerce & Industry of India

The Associated Chambers of Commerce & Industry of India, in an e-mailed statement attributed to Secretary General D.S. Rawat: “Dr. Raghuram Rajan leaving the RBI at a time when a tumultuous global economy poses several risks to India along with the banks grappling with an unprecedented challenge of mounting non-performing assets is quite unfortunate.

PPF account in SBI: Do you know these amazing features, Income Tax benefits and other important details?

EPFO: Your Company is obliged to pay your EPF contribution; know your rights!