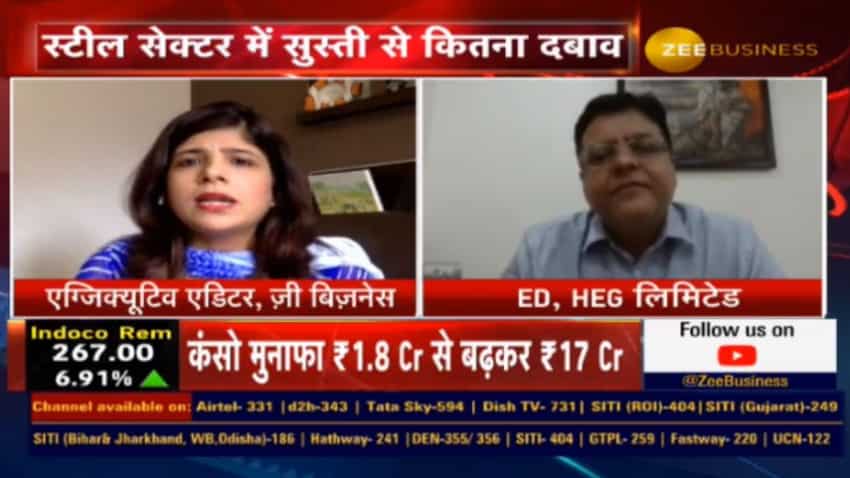 Q: The Company has reported a 71% drop in revenue. What were the major highlights of the quarter?

Q: Going forward, what is your outlook on performance for upcoming quarters as we are slowly heading towards unlocking and demand is returning gradually?

A: COVID lockdown was the major reason in the April to June quarter. But in that, we had inventories due to which we were able to service to the customers despite all the challenges including transportation which was an issue in it. In fact, everything was an issue in the quarter. Our capacity utilization stood at 50% in the quarter. A slight improvement has been seen since July because the small companies which were shut down in April to June quarter have started functioning. HEG sells almost one-third of its production in India and the remaining two-thirds is exported. But COVID had its impact in the global market as well particularly in Europe, where the automotive industry is largely impacted. In fact, the major steel producing nations have reduced their production due to the COVID. We expect that the production will go up when the global market and the steel plants will restart and there is a demand revival. The increased steel production will lead to an increase in demand of the electrode.

Q: Update us about the production capacity on which you are working at present and the time by which it will be ramped up? Can you also give a timeline by which sales can rebound?

A: I think that our capacity utilization will stand somewhere between 55-60% in this financial year, i.e. FY2020-21. It stood at 50% in the first quarter and there should be a slight improvement in it as soon as the steel plants of the world are started and demand returns. This is our outlook. I feel that UHP pricing will be under some pressure for the next two quarters, although it has bottomed-out significantly from the high levels at which it was some 2 years ago. Secondly, the high-cost inventories that we have should be cleaned by December. So, we are expecting a rebound next year from early 2021.

Q: HEG has moved to negative margins from the high EBITDA margins of 65% in FY18. What sort of margin trajectory do you foresee going forward?

A: EBITDA margins will remain modest in the upcoming two-three quarters on the visible line. The extra inventory of the needle coke that is lying with us is the main reason for it and our EBITDA margins will remain modest until this inventory is not flushed out from the system completely. This is why I was saying that a rebound can be seen from the beginning of the next year not only in the global industry but also in our results.

Q: Give us a sense of pricing and imports from China, which is a dominant player in the industry. Are Indian companies sourcing Graphite electrode via imports? At the same time are you looking at opportunities for making yourself Atmanirbhar in terms of indigenous production?

A: As far as Atmanirbhar, being self-reliant, concept is concerned then I would like to say that why unnecessary imports are required of the things in which the nation is self-reliant. India has the production capacity of producing 1.60 lakh tonnes of Graphite Electrode, while there is a demand for just 55,000 tonnes. Even it is maximized in which everyone starts running at the full capacity then also the demand will be limited to 60,000 tonnes only.

Interestingly, two of the five world leaders of this product are based in India and we have so much export surplus that the product is exported to the developed nations like the US, Europe and South East Asia among others. So, truly this is a product that perfectly fits into the concept of self-reliant. Chinese imports were flooding the market until the beginning of 2019. We, however, don’t have any direct competition with them in terms of UHP as that product is quite inferior to ours in UHP. But, we have completed a lot with them in context of the non-UHP products, which is termed as HP-grade, by keeping the prices at the modest level and low to ensure that we can stop the imports coming from China.