The policy will help in saving fuel as old vehicles tend to consume more fuel and will decrease our  dependance  on imports, Gadkari said. 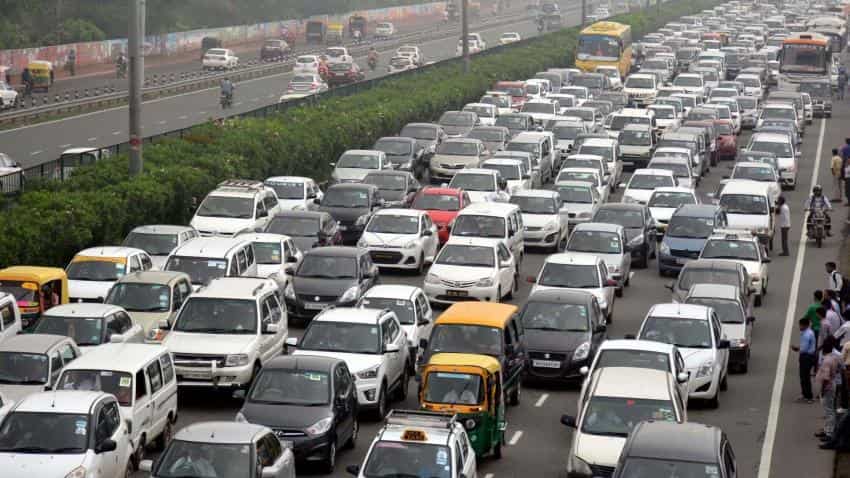 The draft V-VMP policy had earlier proposed to bring under its purview vehicles bought on or before March 31, 2005. Photo: IANS
Written By: ZeeBiz WebTeam
RELATED NEWS

The government will bring heavy and medium-sized vehicles under the scrapping policy, Sailesh Yadav of Zee Business reported.

According to Zee Business, Transport Minister Nitin Gadkari on Wednesday met Finance Minister Arun Jaitley to discuss the way forward for the proposed scrapping of vehicles older than 15 years.

Yadav reported Gadkari as saying, "We have spoken to the Finance Minister, and he has shown his support. In the first phase of the scrapping policy, we will bring in 15-year old medium-heavy sized vehicles under the rule. Then in second phase, small vehicles will be brought in".

The proposed ‘Voluntary Vehicle Fleet Modernisation Plan (V-VMP)' will bring benefits upto 10% on the cost of a new vehicle in exchange of the 15-years or older vehicle. The policy will help in saving fuel as old vehicles tend to consume more fuel and will decrease our dependance on imports, Gadkari said.

"We will discuss the policy with Prime Minister Narendra Modi, the GST Council, the state government, and car manufacturers," Gadkari added.

The draft V-VMP policy had earlier proposed to bring under its purview vehicles bought on or before March 31, 2005 -- about 28 million units.

At the time, the Finance Ministry had raised some objections over the proposed V-VMP by the Road Transport and Highways Ministry to push 28 million decade-old polluting vehicles off the roads, according to a PTI report.

The draft policy said, "To ensure that the resultant impact is beneficial to the environment, the replacement vehicle needs to be BS-IV compliant, which is going to be rolled out nation-wide by April 2017."

The policy also said that in addition to environmental and energy efficiency benefits, V-VMP would be able to generate steel scrap worth Rs 11,500 crore domestically every year with the setting-up of organised shredding centres, of which 50% would be generated by MHCVs (buses and trucks).