HDFC Bank vs Axis Bank vs ICICI Bank: Which private bank stock should you buy?

Macquarie highlights that ICICI and Axis have similar exposures in investors portfolio. On the other hand, Axis Bank’s price to book-value is almost close to HDFC Bank. 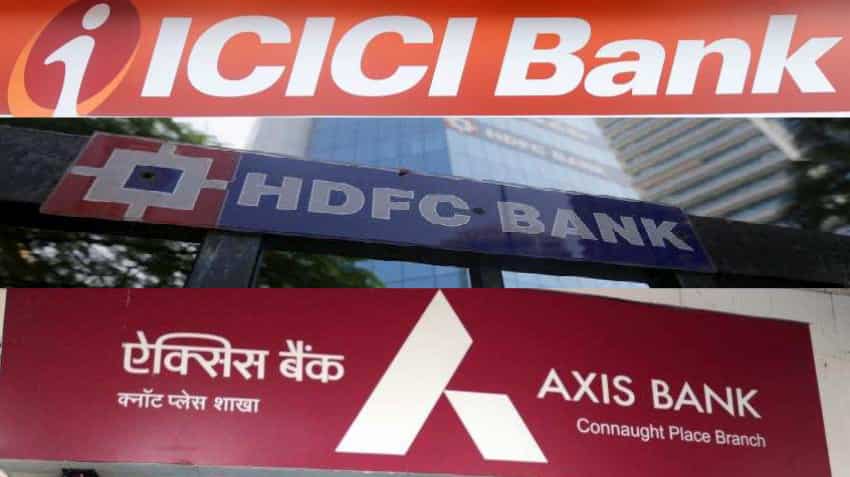 Axis Bank has witnessed various structural changes under Amitabh Chaudhry. New hirings have been done, separate wholesale banking coverage head Ganesh Sankaran who was ex-ED of Federal Bank, tightened risks and compliance. With this, Macquarie has compared Axis Bank with that of other major private lenders like ICICI Bank and HDFC Bank. It needs to be noted that, both ICICI and HDFC Bank are defined as ‘Too Big to Fail Bank’ by RBI, which indicates at promising business going ahead. While Axis Bank is still slightly smaller in comparison to other two, Macquarie highlights that ICICI and Axis have similar exposures in investors portfolio. On the other hand, Axis Bank’s price to book-value is almost close to HDFC Bank.

Which is the best stock to buy? Find out, as per Macquarie who in its research note has compared Axis Bank with ICICI and HDFC Bank.

Axis and ICICI Bank both offer a similar exposure in an investor’s portfolio – that of a traditionally corporate oriented bank, transforming into a retail-oriented bank.

Both have the same near-term investment thesis of an uplift to PAT, currently weighed down by a stressed book, from normalization of credit costs. The magnitude of the recovery too is broadly expected to be similar, given exposures to similar consortium loans and broadly similar coverage ratios. There’s little to pick between the two, in Macquarie’s view.

Axis has traditionally traded at a ~20% premium to ICICI Bank (core basis), and the valuation premium is ~50% after the recent rally – almost 1 standard deviation away above the historical average – leaving scope for some normalization. On the other hand, HDFCB has traded at a ~70% premium to Axis, but currently the premium is only ~40% (almost 1 standard deviation below long term average). A significant re-rating has already occurred in Axis and has priced in a part of the journey towards 18% RoE already.

Finally, Macquarie says, “We reiterate our stance that the likelihood of Axis Bank’s PBV multiple re-rating up to close to HDFCB is lower than the likelihood of ICICI Bank’s PBV multiple re-rating up to where Axis currently is. We are NEUTRAL on Axis with a TP of Rs 760 (1% upside) and have an Outperform rating on ICICI Bank with TP of Rs 450 (14% upside).”