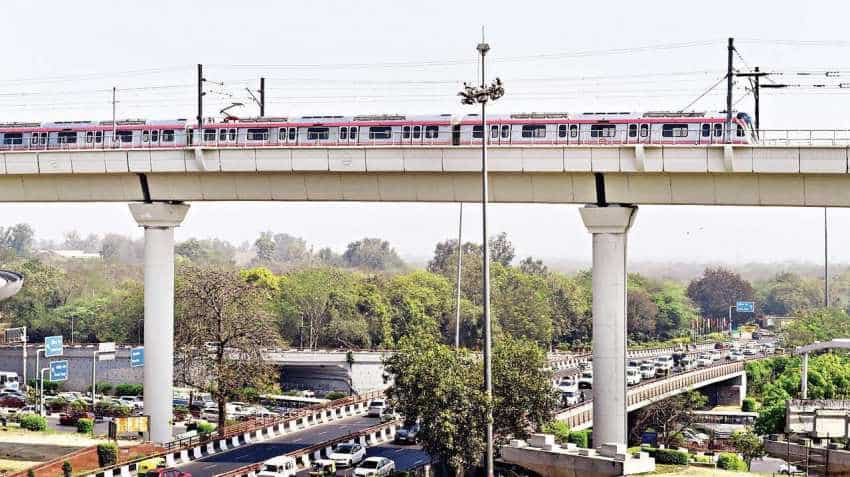 The 59-km-long Pink Line, part of the Phase-III of the DMRC network, spans from Majlis Park to Shiv Vihar and all the remaining sections are likely to be opened by September. Image Source: PTI
Written By: PTI
RELATED NEWS

The soon-to-be-opened Hazrat Nizamuddin Metro station on the Delhi Metro's Pink Line is all set to emerge as a major transit hub that would provide direct connectivity with the Nizamuddin railway station as well as the Sarai Kale Khan inter-state bus terminus, officials said Thursday.

The 59-km-long Pink Line, part of the Phase-III of the DMRC network, spans from Majlis Park to Shiv Vihar and all the remaining sections are likely to be opened by September.

"The station will emerge as a major transit hub. It will have dedicated entry/exit points connecting to the Hazrat Nizamuddin railway station and the ISBT at Sarai Kale Khan," a senior DMRC officials said.

One of the entry/exit points will be within a vicinity of 50 m from the Sarai Kale Khan ISBT. Another entry/exit will be near the Nizamuddin railway station approximately at a distance of 150 m, the DMRC said.

This station will be a major boost from the point of view of connectivity as both the Hazrat Nizamuddin Railway station and the Sarai Kale Khan ISBT do not have any metro connectivity presently.

The nearest metro stations are at least 3-4 km away. The station will also be equipped with broad staircases and escalators for the convenience of passengers, he said.

The famous Indraprasth Park and the upcoming Seven Wonders project will be within walking distance from the Nizamuddin station. The Nizamuddin metro station also provides connectivity to the Nizamuddin Railway station as well as the Sarai Kale Khan ISBT.

The metro station will also have drop-off bays near its three entry/exit points as per the multi-modal integration (MMI) plan. Adequate greening and beautification have been done around the underground station and tabletop pedestrian crossings have been provided on the roads in the vicinity for the movement of the pedestrians.

The station has also been adorned by 30 artworks which portray the heritage of the nearby area. Thematic impressions and 'jharokhas' have also been used to beautify the station.

The major challenges faced during the construction of the Nizamuddin station was the very high water table and highly varying geo-technical conditions. Controlled blasting was also adopted to break the very hard rock.

Due to highly-varying geo-technical conditions, half of the station was constructed using bottoms-up approach and other half with top-down approach. The diversion of Ring Road was also a big challenge. There were innumerable power as well as Delhi Jal Board utilities (both underground and overhead) which had to be meticulously diverted so that the services rendered by these utilities did not suffer, the official said.

Hazrat Nizamuddin is the 3rd biggest railway terminus of the national capital after New Delhi and Delhi Junction. Most south-bound trains including Rajdhani Express and super-fast trains originate from that station.

The Sarai Kale Khan ISBT is one of three major bus terminii of Delhi along with those at Kashmere Gate and Anand Vihar.