Have Rs 2000 note? Fake or real? Here is foolproof way to identify the currency

The new Rs 2000 note has motif of the Mangalyaan on the reverse, depicting the country's first venture into interplanetary space. 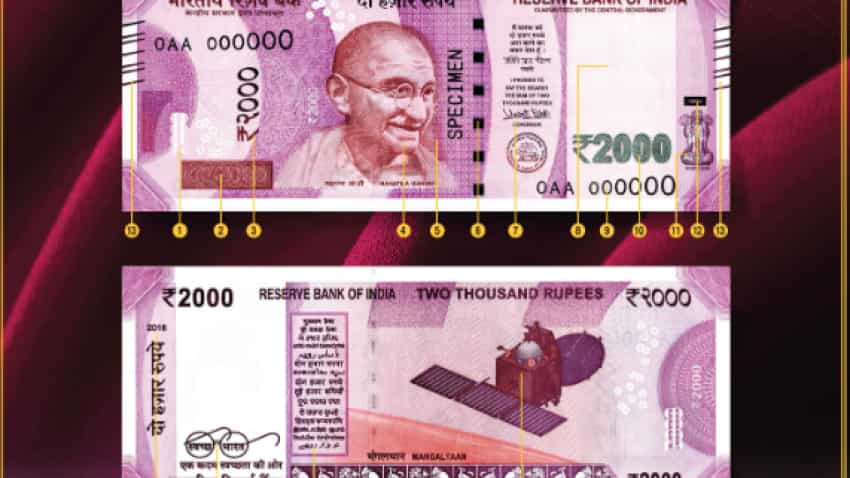 The note has other designs, geometric patterns aligning with the overall colour scheme, both on the obverse and the reverse. Photo: RBI Official Website
Written By: ZeeBiz WebTeam
RELATED NEWS

The Reserve Bank of India gave a complete makeover to the Indian currency notes to curb the influx of black money in the Indian economy. The new currency notes were deigned according to the Mahatma Gandhi New Series. Among all the Indian notes, Rs 2000 was a new addition to the existing denomination, which happened in wake of the decision to demonetize Rs 500 and Rs 1000 currency notes.

The Reserve Bank of India introduced new design banknotes in the denomination of Rs 2000 as part of Mahatma Gandhi(New) Series. The new denomination has motif of the Mangalyaan on the reverse, depicting the country's first venture in interplanetary space. The base colour of the note is magenta. The note has other designs, geometric patterns aligning with the overall colour scheme, both on the obverse and the reverse. The size of the new note is 66mm x 166mm.
Features of the new Rs 2000 note:

1. See through register with denominational numeral 2000 can be seen when the note is held against light.

2. Latent image with denominational numeral 2000 which can be seen when the banknote is held at 45 degree angle at eye level.

4. Portrait of Mahatma Gandhi in the centre

6. Colour shift windowed security thread with inscription 'भारत', RBI and 2000. Colour of the thread  changes from green to blue when the note is tilted.

9. Number panel with numerals growing from small to big on the top left side and bottom right side.

11. Ashoka Pillar emblem on the right.

For the visually impaired,

12. Horizontal rectangle with ₹ 2000 in raised print on the right

13. Seven angular bleed lines on left and right side in raised print.

14. Year of printing of the note

16. Language panel towards the centre

17. Motif of Mangalayan-reflecting country's first venture in the interplanetary space.