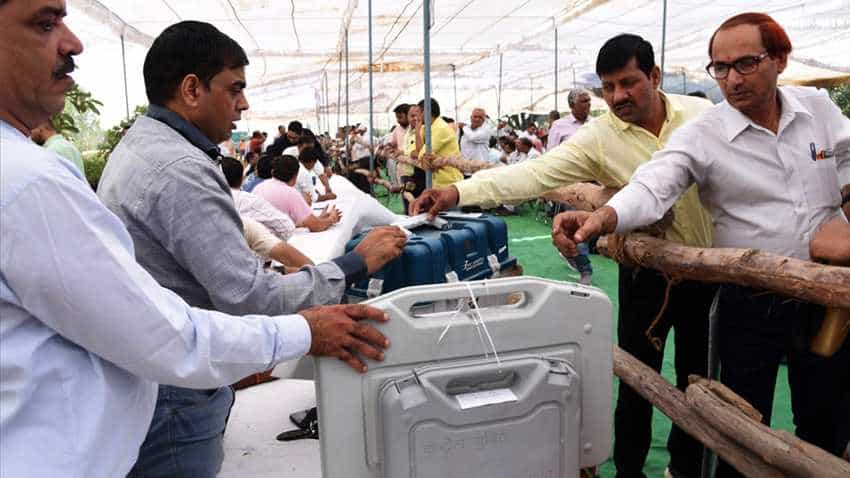 Haryana election result highlights​: Counting of votes for Haryana assembly election began this morning with ruling Bharatiya Janata Party(BJP) hoping to retain power. Most exit polls have predicted an easy victory for BJP. In 2014, BJP had won 47 seats and the Congress 15, with two Haryana Janhit Congress legislators later merging with it. The INLD had 19 seats and the BSP and the Shiromani Akali Dal one each. There were five independents. However, most INLD MLAs and prominent leaders switched to the BJP, Congress or JJP after the election. Counting of votes is also taking place for Maharashtra assembly elections today.

2:40 pm: Randeep Singh Surjewala has lost from Kaithal. He is a member of Congress and a sitting MLA from Kaithal seat in Haryana. He held water supply and sanitation, parliamentary affairs, electronics and information technology, science and technology and public works as a minister in Haryana cabinet.

2:35 pm: DS Hooda,Congress alleges that BJP is trying to pressurize independent candidates as most of them want to join Congress. "It can't be accepted in democracy.Independent candidates should be able to freely choose the party whom they wish to support.I want to appeal to EC about it through media," he said.

12:55 pm: BJP`s Haryana in-charge and party General Secretary Anil Jain lauded the JJP founder. He said: "Dushyant Chautala has emerged as a seasoned leader and he is taking forward Devi Lal`s legacy." Jain, however, evaded the question of a possible alliance with JJP to form the government in Haryana. "Chaudhary Devi Lal was opposed to the Congress and in view of this Dushyant Chautala will not go with the Congress," he said.

12:05 pm; Jannayak Janata Party Chief Dushyant Chautala has dismissed reports claiming that he has been offered the chief minister post by Congress. "I have not had any discussions with any one. Decision will be taken only after the final numbers are out," he said.

12:00 pm: Union Minister Prakash Javadekar on Thursday said that BJP will also win upcoming Jharkhand and Delhi polls after Haryana and Maharashtra. "After five years, people gave us more mandate in Lok Sabha elections. Now they will give us more mandate in Assembly elections. After Maharashtra and Haryana, Jharkhand and Delhi also we are winning," Javadekar told ANI.

11:36 am: The latest trends available for 86 seats in Haryana showed that the Congress was ahead in 25 seats, the Jannayak Janata Party (JJP) in 11 constituencies and the Indian National Lok Dal (INLD) in 2 seats. BJP continues to lead in 40 seats but there could be a hung assembly in the state. In that case, JJP could be kingmaker.

10:47 am: According to the official data given on the Election Commission website, BJP is leading on 40 seats while Congress is ahead on 25 seats. Haryana Chief Minister and BJP leader Manohar Lal Khattar and two-time Congress Chief Minister Bhupinder Singh Hooda are leading from their respective Assembly constituencies.

9:45 am: Senior Congress leader Bhupinder Singh Hooda is confident that Congress will come to power in Haryana with majority. Here is what he told ANI -

9:30 am: The battle in Haryana is turning out to be closer than expected. While BJP leads on 42 seats, Congress is now ahead of 41. This might end up as a very close contest.

9:15 am: Dushyant Chautala of JJP believes that neither BJP nor Congress will be able to get majority in Haryana. He is confident that JJP will be the kingmaker in the state. "Na BJP, na Congress 40 par karegi, satta ki chabi JJP (Jannayak Janata Party) ke haath mein hogi," Chautala said.

9:00 am: Which shares will see maximum action due to assembly election results ṭoday? Check here -

8:52 am; Wrestler Babita Phogat remains confident of a win from Dadri assembly constituency. While speaking to media on Thursday morning, she said that people have always given her love. "People have given me love and support, that is my strength, & what keeps me going. I have faith in public and myself, people will give blessings to their daughter," she said.

8:45 am: The initial trends are out for Haryana elections giving a major lead to BJP. According to Zee News, BJP is leading in Haryana on 46 seats while Congress is ahead on 19.

8:35 am: Will election results have an impact on share market? Watch to find out -

8:00 am: The counting of votes has started in Haryana. Nearly 1.24 crore ballots for the 90 Assembly seats of Haryana will be counted amid tight security. The first trends are expected by 10 am. Amid reports of minor skirmishes, 68.31 per cent voting was recorded on October 21. The result will decide the fate of 1,169 candidates, including 105 women and a transgender.

7:43 am: This year's Haryana election is also witnessing two wrestlers contesting from different seats. Yogeshwar Dutt, an Olympic medallist is is contesting from Baroda against Congress candidate Sri Krishan Hooda who successfully contested in the 2009 and 2014 elections by defeating Kapoor Singh Narwal of INLD each time. Babita Phogat, who holds two Commonwealth medals, has contested from Dadri seat in Haryana on BJP`s ticket. She is facing Nripendera Sangwan of the Congress and Somveer Sangwan, a former BJP candidate who contested as an independent.

7:38 am: Congress spokesperson Randeep Surjewala who is a close aid of Rahul Gandhi is contesting from Kaithal Assembly constituency. Surjewala is up against Leela Ram Gujjar who had been a former INLD member and has recently joined BJP. A close fight is expected between the two.

7:30 am: Manohar Lal Khattar is contesting from Karnal. His day of poll was also unique when he travelled by train from Chandigarh to Karnal city, took an e-rickshaw to reach his home and then rode bicycle to reach the polling booth. He is tipped to be back with a huge margin.

7:15 am: Congress interim President Sonia Gandhi has called a meeting of senior party leaders on Friday after the results of Assembly polls in Maharashtra and Haryana are out. The meeting will be held on October 25 and is expected to be attended by all party general secretaries and state incharges. It is scheduled to take stock of the situation in the aftermath of the results.