After a layoffs in India and and visa curbs in the US, IT industry body Nasscom has stepped up its lobbying with America and has paid a total amount of $1,50,000 (nearly Rs 1 crore) to two registered lobbyists in the country in the first quarter (Q1) of 2017. 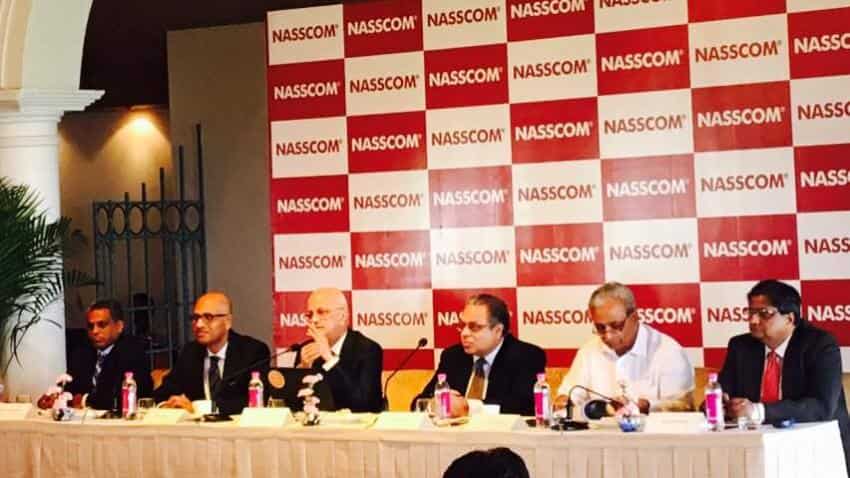 Nasscom president R Chandrashekhar with eminent leaders from the Indian IT industry at the event on Employment & Skills Imperatives on May 18, 2017. Image Source: Nasscom/Twitter
Written By: PTI
RELATED NEWS

Facing rough weather amid large-scale layoffs and visa curbs in the US, the Indian IT industry body Nasscom has stepped up its lobbying with the American lawmakers significantly with an over one-third increase in money spent on such activities.

According to the latest lobbying disclosure reports filed with the US Senate, the National Association of Software and Services Companies (Nasscom) paid a total amount of $1,50,000 (nearly Rs 1 crore) to its two registered lobbyists in the first quarter (Q1) of 2017.

This marks a significant rise from $1,10,000 paid to the two lobbyists in the previous quarter ended December 2016. The amount was same for each of the four quarter of 2016.

However, the other lobbyist, Wexler & Walker, a unit of Hill+Knowlton Strategies, LLC, was paid $100,000 in the first quarter of 2017, as against $60,000 in the previous three-month period and in many of the previous quarters.

As per the lobbying disclosure report, the "specific lobbying issues" undertaken by this lobbyist included those related to immigration. The "general issues" included tax and trade matters.

ALSO READ: H-1B visas for Indian IT professionals would not come down: Nirmala Sitharaman

The houses of Congress and federal agencies with whom it lobbied on behalf of Nasscom, which itself acts as a lobby group for the $150 billion Indian IT industry, included the US Senate and the US House of Representatives.

On the other hand, Lande Group covered a larger number of "specific lobbying issues", including with several federal agencies, as per its first-quarter disclosure report.

In addition to the Senate and the House of Representatives, The Lande Group also did lobbying with the White House Office, the US Trade Representative, the US Citizenship and Immigration Services and the departments of state, commerce and homeland security.

Nasscom took a delegation of the Indian IT industry earlier this year to the US to engage with members of the Trump administration on issues like clampdown on work visas and flow of skilled manpower between the two nations.

During the visit, Nasscom president R Chandrashekhar had said the debate in the US over H-1B visas has become a political and emotive issue as there is a "yawning gap" between the facts and perception and the Indian IT firms contribute immensely to the US economy and jobs creation.

The visit of the Nasscom delegation came in the wake of the ongoing debate in the US and moves to curtail the use of H-1B visas, widely used by Indian IT majors.

The US recently also accused top Indian IT firms TCS and Infosys of "unfairly" cornering the lion's share of the H-1B work visas by putting extra tickets in the lottery system, a charge vehemently countered by Nasscom.

Close on the heels of this accusation, Infosys went on to announce plans to hire 10,000 Americans, though this move was described by some as an act to appease US President Donald Trump's administration which has tightened the rules of H-1B visa programme to stop its 'abuse'.

An analysis of the lobbying disclosure reports filed for Nasscom shows that the Indian software industry body paid $440,000 to the two registered lobbying firms in 2016.

The Lande Group has been lobbying on behalf of Nasscom since third quarter of 2010, while Wexler & Walker registered itself as a lobbyist for the industry body in October 2015.

Previously, Hill and Knowlton had registered itself as a lobbyist for Nasscom way back in February 2003 but that association got terminated in first quarter of 2008.

Since the beginning, the lobbying issues for Nasscom have included "immigration and technology issues of interest to the Indian software industry".