"To ensure rates will not be inflationary", Jaitley said. 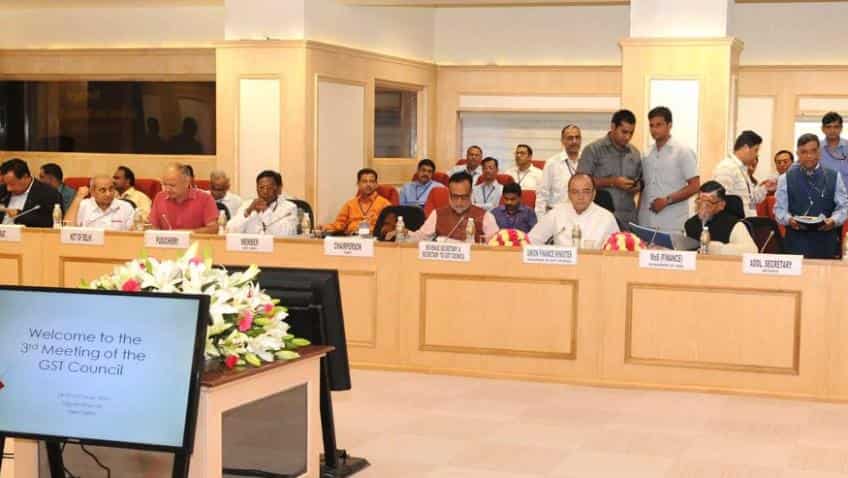 He said that 14% secular growth rate will be basis for compensation. Photo: Ministry of Information and Broadcasting

The Goods and Service Tax (GST) Council on Tuesday met in New Delhi to decide on key issues such as GST rates, service tax assessments and compensation to states by the Centre.

Finance Minister Arun Jaitley said that India GST tax rate structure to be decided and the discussion will continue by tomorrow.

Jaitley said, that on the first day of the meet, GST Council has reached consensus on definition of revenue to compensate states for revenue loss from GST implementation, a PTI report said.

According to a PTI report, food items are proposed to be exempt from the tax and 50 per cent of the items of common usage will be exempt to keep the inflation under check. The lower rates would be levied on essential items and the highest for luxury and demerit goods."To ensure rates will not be inflationary", Jaitley said.

Kerala Finance Minister, Thomas Issac, who was also present during the meet said, that the GST  Council has reached consensus on state compensation; base year to be 2015-16. There will be four slabs of GST rates, he added.

The four slabs structure will include 6, 12, 18 and 26% with lower rates for essential items and highest band for luxury goods, even as it reached consensus on payment of compensation to states.

During the three day meet started from today and will go up to 20 October, the GST Council is supposed to decide on the tax rate, will recommend the taxes to be subsumed and exempted from GST, the rates of taxation and the model central, state and integrated GST laws.

The states will, however, be able to adopt a GST structure that is different from that recommended by the GST Council and the council recommendations will not be binding upon the states.

(with PTI and IANS inputs)