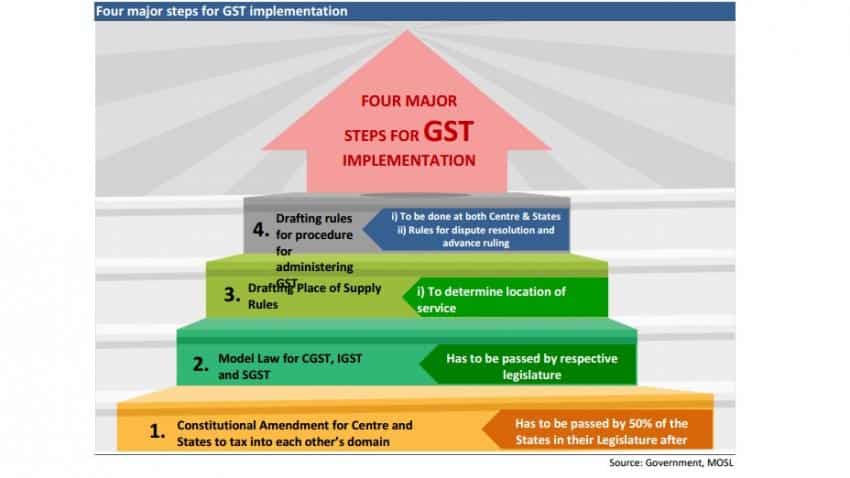 India has a dual taxation system of goods and services, which is quite different from what the GST Bill proposes. Photo: MOSL research paper
RELATED NEWS

The fate of India’s biggest tax reform since 1947 is still hanging in the balance, and is expected to be cleared by the Rajya Sabha on August 3.

The GST bill was passed in the Lower House of the Parliament in 2015 and its approval process is nothing less than complicated.

Currently, India has a dual taxation system of goods and services, which is quite different from what the GST Bill proposes.

"If we can pass it in the monsoon session (of Parliament beginning next month), then we can implement it in April 1, 2017.

1) The Bill needs to be approved in the Rajya Sabha by a two-thirds majority, as it is a constitutional amendment. This is the reason it has been stuck, as the ruling party doesn't hold a majority in the Upper House.

2) After it is approved, the bill needs to be approved by 50% of the state assemblies. As the BJP-led government is in power in 13 out of 29 states, we see a high probability of the Bill being passed by the states.

4) Setting up of IT infrastructure. The process for this has already started, with the setting up of Goods and Services Tax Network (GSTN), a non-government private limited company launched

on March 28, 2013. The GSTN has received bids from five IT companies, including Microsoft, TCS and Infosys, to build the IT infrastructure.

The GST bill is still at the initial steps of implementation and will need major reforms considering the autobomy that states enjoy currently, in collecting taxes.

“Currently, there are various area-based indirect tax exemptions provided by both the central and state governments. With the implementation of the GST, area-based exemptions will need

to be phased out, as they break the free flow of input credits in the value chain,” a report by Motilal Oswal, by analysts Sandeep Gupta, Nikhil Gupta, Somil Shah, and Mehul Parikh, said. Central GST, State GST and Integrated (Inter-state) GST.

Integrated GST (IGST) or Interstate GST will be a combined rate of Central GST (CGST) and State GST (SGST) on all inter-state transactions of taxable goods and services. It&#39;s important however,

to note that, according to an explanation of IGST on taxguru.in, the IGST is only a mechanism to monitor the transfer of tax in inter-state transactions, and is not an additional tax in itself.

Three possible outcomes of the GST implementation were provided by the Motilal analysts.

• Refund of duty: The entity currently exempt from the payment of duty will be liable to pay duties as required under the normal course of business. The duty so additionally paid will be refunded by the state/ central government after assessment. Some states (J&K, northern states) follow this mechanism and provide refunds. Our discussions with experts suggest that though this mechanism is the most preferred, corporates may not find this agreeable, as there could be various complexities in assessment and additional working capital could be blocked due to delay in receiving refunds.

• Upfront payment: Under this mechanism, the government pays the present value of estimated duty concessions agreed to the corporates upfront. Going forward, the entities pay taxes in the normal course of business. However, this will entail significant amount of cash outflow from the state / central government upfront, and hence, may be difficult to adopt.

• Deferral of payment of taxes: Under this scheme, the entities eligible for exemption levy taxation as in the normal course of trade. However, the duty so collected is retained, as an interest-free tax deferral for a specified period.

“If option 2 or 3 are followed, there could be a decline in the operating earnings (EBITDA), which may be counterbalanced by increase in nonoperating income and decline in borrowing cost,” the report stated.