The council will decide on long pending issues of threshold limit for applicability of the tax as well as the limit for dual control between Centre and states. 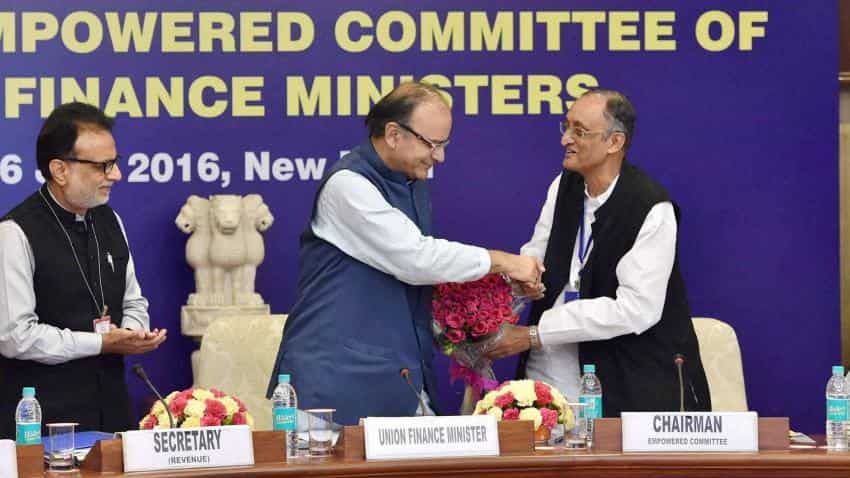 Finance Minister Arun Jaitley with chairman of the empowered committee Amit Mitra during a meeting with the Empowered Committee of State Finance Ministers at Vigyan Bhawan in New Delhi on Tuesday. Photo: PTI
Written By: ANI
RELATED NEWS

The Goods and Service Tax (GST) Council will on Thursday hold its first meeting here in the national capital.

The council will decide on long pending issues of threshold limit for applicability of the tax as well as the limit for dual control between Centre and states. Union Finance Minister Arun Jaitley will chair the meeting.

The GST is a single indirect tax which will subsume most of the central and state taxes such as VAT, excise duty, service tax and central sales tax. The two-day meet of the GST Council is likely to iron out issues between the Centre and states for rolling out the new indirect tax regime from April 1, 2017.

It will take up the discussion on issues of dual control and threshold with states demanding that the legal and administrative power for imposing tax on entities with turnover of up to Rs. 1.5 crore.

The Centre has proposed that small traders, having annual turnover of up to Rs 20 to 25 lakh, could be exempted from the GST, but states have demanded that the limit be kept at 10 lakh rupees.

The GST, which is considered as the biggest tax reform since Independence, will do away with the indirect taxes and usher in one tax for the entire country. The bill was unanimously passed by the Parliament last month and over 18 states have ratified the bill.

Prime Minister Narendra Modi had on September 14 held a meeting to review the preparedness for the rollout of the GST. The meeting was attended by Jaitley, both the Ministers of State for Finance, senior officers from the Prime Minister's office and the Finance Ministry.

In order to ensure that there is no slippage on date of implementation of GST from April 1, 2017, the Prime Minister reviewed the progress made on various steps needed for the rollout of GST relating to preparation of Model GST laws and rules to be framed, establishment of IT infrastructure for both Centre and States, training of officers of Central and State Governments and outreach for awareness of trade and industry.He directed that all steps must be completed well before April 1, 2017.