The Telangana government wants the GST on its flagship projects to be reduced to 5% from 12% which was revised earlier in Delhi. 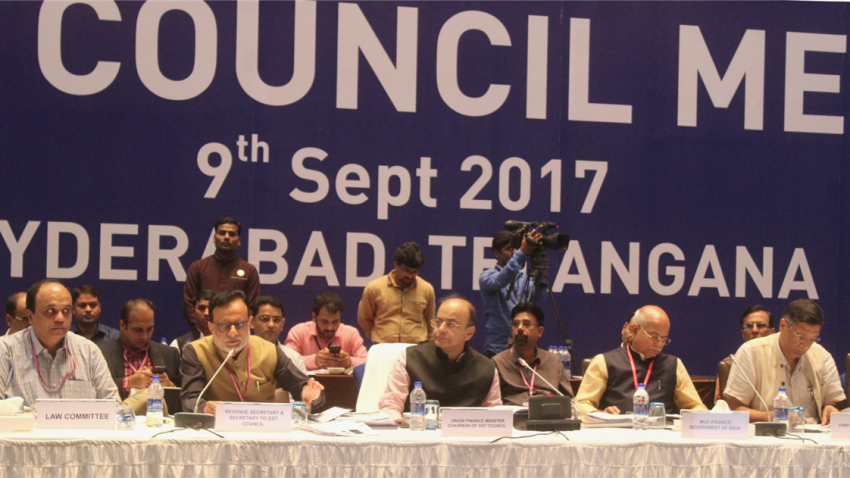 A crucial meeting of the Goods and Services Tax (GST) Council was underway here on Saturday to discuss key issues relating to implementation of the new tax regime.

Chaired by Finance Minister Arun Jaitley, the 21st meeting of the GST Council was being attended by finance ministers of states and GST Secretariat officials.

Over 150 delegates were attending the meet being held at the Hyderabad International Convention Centre (HICC).

The meeting is expected to take a decision on the demand of the Telangana government to reduce the GST to 5% on its flagship projects. At the previous meeting held in Delhi, the GST was reduced from 18% to 12%.

The Telangana government, however, insisted that the GST on ongoing projects should be brought down to 5% as the higher tax rate may put an additional burden of Rs 9,000 crore.

At one stage, Chief Minister K Chandrasekhar Rao had threatened to move the court over the issue. He later dashed off a letter to Prime Minister Narendra Modi.

Telangana is seeking the relief for public utility projects like irrigation schemes, Mission Kakatiya for restoration and revival of tanks and for providing piped drinking water to every household and a two-bed room housing scheme for the poor.

Telangana Finance Minister E. Rajender said the state would reiterate the demand for scrapping GST on ongoing work contracts or at least reducing it to 5%. The state is also seeking reduction in GST for the granite and marble industry and the beedi sector in view of their huge employment potential.

He said most of the states were supporting reduction in GST on public utility projects.

Telangana argues that its flagship projects were launched before July 1, when GST came into effect, and hence it will not be fair to impose a higher slab.

The meeting, the first to be hosted by Telangana, was also expected to discuss issues like passing on tax benefits to customers, setting up of the national and state-level anti-profiteering authorities, problems relating to online tax payments and delay in transfer of IGST and CGST amounts to states.

The GST Council over the last 10 months sorted out contentious issues and decided on a four-tier tax structure of 5, 12, 18 and 28%. Several sectors are still demanding that the council shift them to lower slabs.