The GST Council had met briefly through video-conference on Wednesday when a number of  non -BJP states had disagreed to make a decision on the issue without being physically present in the meeting. 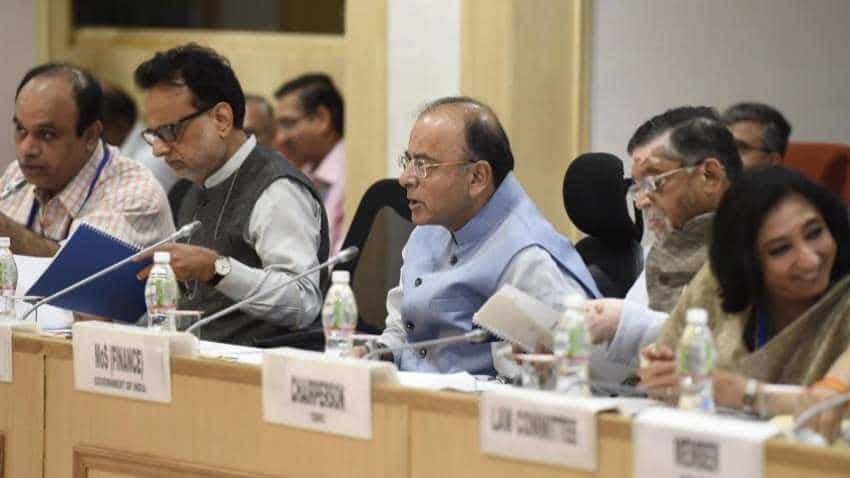 GST Council Meeting LIVE UPDATES: The Goods and Services Tax (GST) Council met today. The decisions today will provide relief to the middle-class homebuyer in metros as wll as non-metro cities. Finance minister Arun Jaitley had earlier announced that a final decision on the GST rates on housing properties, will be taken up in the meeting today. The GST Council had met briefly through video-conference on Wednesday when a number of non-BJP states had disagreed to make a decision on the issue without being physically present in the meeting. However, the Council had agreed to extend the deadline to file 3B returns by two days. GSTR-3B is a monthly summary return. The real estate sector was looking for GST intervention to come out of the slump it is seeing over the past few years. The Council in its meeting today may also consider reducing tax on cement from 28 per cent to 18 per cent to boost the realty sector. The proposed GST cut in cement and the GoM report were also on the agenda of the GST Council meeting today, sources had said earlier

- In the press note, the GST council said, "Real estate sector is one of the largest contributors to the national GDP  and provides employment opportunity to large number of people. 'Housing for All by 2022" envisions that every citizen would have a house and the urban areas would be free of slums.

- Finance minister Arun Jaitley tweets: "In its 33rd meeting the GST Council has accorded big relief to Real Estate Sector. GST rate on affordable housing has been reduced to 1% from 8% & for others from 12% to 5% for both without ITC.This will give boost to housing for all & fulfill aspirations of Neo/Middle classes. "

- The GST Council has decided:

a) GST shall be levied at effective GST rate of 5% without ITC on residential properties outside affordable segment.

b)GST shall be levied at effective GST of 1% without ITC on affordable housing properties. 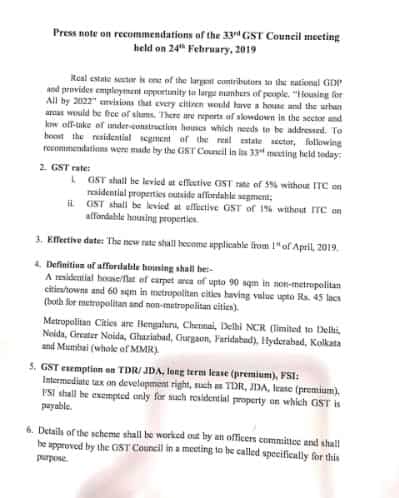 -  After the meeting, Finance Minister Arun Jaitley: GST payable for under-construction flat will be now 5%. Affordable housing will have 1% GST rate

Check what was decided in the last meeting of the GST Council:

- Finance Minister Arun Jaitley announced after Wednesday's meeting, "GST Council will take up the real estate issues on Sunday and the Council extends the deadline of 3B returns by two days."

- In the last meeting, the Council had differences over issues of housing and lotteries, and official sources said lotteries still have not reached a level where discussions can take place.

- A Group of Ministers headed by Gujarat Deputy Chief Minister Nitin Patel, which has favoured 3 per cent tax, down from 8 per cent, on the affordable housing category had submitted its report to the GST Council for decision by Sunday. During the interaction, Punjab Finance Minister Manpreet Badal pointed out that land is a state subject and so cannot be included in the GST, while the Bihar representative said it was in principle in agreement with the report, but wanted a lower rate of 1 per cent on small businesses operating from a 10 per cent carpet area in residential areas.

- Delhi, Kerala, West Bengal, as well as some states ruled by the opposition Congress asked for a physical meeting and not a video conference since the issues under consideration, were too important.

They said they could not announce any schemes related to real estate, since the Election Commission's model code of conduct will be applicable soon.
(With agency inputs)