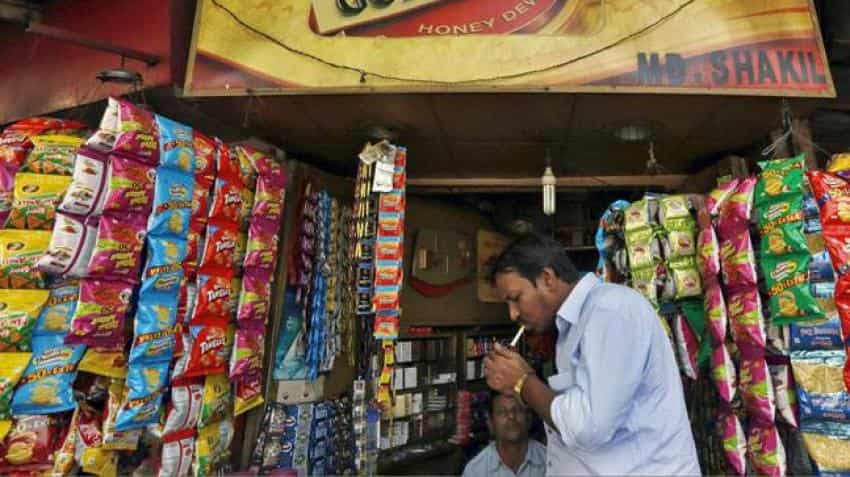 The anti-evasion measure comes on the back of deceleration in GST revenue collections. Image source: Reuters
Written By: PTI
RELATED NEWS

The GST Council is likely to consider levying cess on certain commodities like pan masala at the manufacturing stage itself, a move aimed at checking tax evasion and shoring up revenues.

The Council will look at levying the cess at the manufacturing stage based on production capacity as against the current practice of imposing it on supplies made by the manufacturer.

This proposed amendment to the GST (Compensation to States) Act, 2017, would be deliberated upon by the council in its meeting later this month.

As per the amendment, compensation cess would be levied on the presumptive capacity of production declared by a manufacturer to the Goods and Services Tax (GST) authorities, sources told PTI.

Commodities like pan masala are prone to tax evasion as they are available in small sachets and are bought mostly in cash and hence tracking their final supplies is difficult for tax authorities.

Once the Council, chaired by Finance Minister Arun Jaitley and comprising his state counterparts, approves the proposal, it would be sent to the law ministry for vetting.

The amendment is likely to be introduced in the second leg of the Budget session of Parliament in March.

Currently, on top of the highest GST rate of 28 per cent, 60 per cent cess is levied on pan masala.

A cess, on top of highest tax rate, is levied on luxury, demerit and sin goods.

The proceeds from the cess are utilised to compensate states for any revenue loss on account of implementation of the GST regime from July 1, 2017.

According to sources, a new section is likely to be inserted in the GST (Compensation to States) Act as an "enabling provision" giving power under the law to levy and collect cess on "specified goods" based on the capacity of manufacture or production.

This provision was necessary to "safeguard revenue interest", they said, adding once the cess is levied at the manufacturing stage, further supplies would not attract the levy.

The rules for arriving at the annual value of supplies based on the capacity of production would be framed by the GST Council and such value for each factory or unit would be determined by an Assistant Commissioner level officer.

Besides, the amendment is also likely to provide for situations wherein there has not been any manufacturing in a factory for a continuous period of 15 days or more.

In such cases, cess calculated on a proportionate basis is proposed to be abated for such period.

The anti-evasion measure comes on the back of deceleration in GST revenue collections, which slipped to over Rs 83,000 crore in November 2017 from over Rs 95,000 crore in July.

Commenting on the proposal, AMRG & Associates Partner Rajat Mohan said the provision would be like the erstwhile Central Excise regime whereby tax collection was based on number of packing machines installed in the factory for items like pan masala, gutkha, unmanufactured tobacco and chewing tobacco which are prone to tax evasion.

"Companies producing notified goods might be in state of jinx, as dual valuation provisions are to be made applicable.

But the move, he said, could lead to rise in litigation as there would be numerous open-ended questions like determination of annual production capacity, temporary closure of factory and lower production due to lean season.

Deloitte India Partner M S Mani said it is expected that several anti-evasion measures would be put into effect in order to curb evasion and increase revenue collections.

"These could include introduction of reverse charge on certain transactions, introduction of GST on the basis of presumptive capacity for certain products, in addition to e- way bill system that comes into force?from February 1," Mani said.