Growth rate will depend on range of factors: CEA Arvind Subramanian

If oil prices rise it can affect growth next year, as it has direct bearing on GST growth and inflation 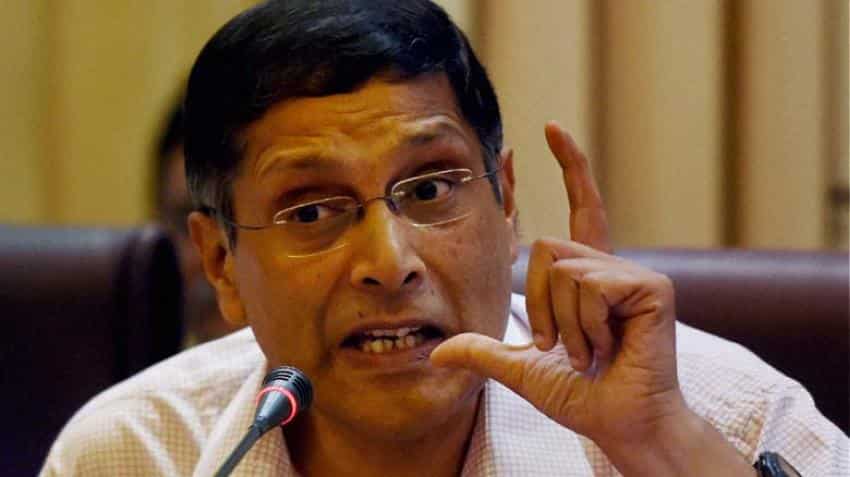 The survey said the government plans to reduce the fiscal deficit for the current financial year from estimated 3.2% to 3% in the next financial year.Image source: PTI
Written By: ZeeBiz WebTeam
RELATED NEWS

India's annual Economic Survey presented in Parliament yesterday predicted that India's real GDP will will scale up to 7 to 7.5% in FY 2018-19.  The survey also said that the government plans to reduce the fiscal deficit for the current financial year from estimated 3.2% to 3% in the next financial year.
Chief Economic Adviser Arvind Subramanian, who  authored the survey, in an interview with Zee Business's Mihir Bhatt talks about the impact of GST and demonetisation and much more. Excerpts:

Do you think that there is a strong recovery in the economy underway?

You would have seen that our forcast for the year's GDP growth is 6.3% and for 2018-19 it is between 7% and7.5%. This means that this year there will be a further boost to growth, but how much, will depend on a range of factors. The range of growth, i.e. 7 to 7.5%, means that there will be a jump of 25 basis points to 75 basis points. This prediction is based on exports being higher than this year, and the growth will be backed by the rise in the world economy.

Secondly, this year's growth, which was 6.3%, was dragged down due to some factors like GST and demonetisation. These factors will not be there in the next financial year. However, we will have to be mindful of other factors like oil prices that may drag growth down. If oil prices rise it can affect the growth next year, as it directly have an impact on GST growth and inflation.

Earlier, you had mentioned that crude prices can go up by 12%. In addition, the Saudi Aramco IPO can also globally increase the prices. Keeping this in mind, do you think the next financial year will be ideal year to bring petroleum products under the ambit of GST?

Bringing petroleum products under the ambit of GST is very important. A rise in prices is another reason to bring it under GST.

Yes, you are right that bringing petroleum products under GST will not only have a cascading effect on oil prices, but also on products that are directly related to it. The cost of several things will go down and this will have a direct impact on the revenue.

Our finance minister has said that all ambitious reforms related to GST will have a direct impact on GST and we will have to accept it. That's why all ambitious steps for reform will be taken after GST revenues are stabilised.

The survey says that the number of taxpayers has increased after GST was rolled-out. Will GST revenues stabilise in this quarter?

In next one or two quarters, we will be able to develop a sense of things that are happening and the level at which it will stabilise. If it stabilises at a low level that is also not a good thing for the economy.

However, there is an early indication that GST revenues are good and healthy, but let's wait for next one to two quarters. A clear idea on GST revenues will help us to contemplate other reforms like bringing electricity and petroleum under the GST ambit.

I would like to compliment you on the survey. It is a pink survey that conveys a strong message about the state of women in India. I would like to say that the facts presented about girls are true, especially in backward areas. Secondly, do you think  judiciary can be more helpful in fast-tracking reforms and economic growth? Would you please elaborate something about it?

To be true, this year, we have a completely new research on gender issues. The research provides some interesting facts like how much improvement has taken place, where has it happened and places where more improvements are needed.

Everyone knows about the abortion that happens across India just because we neglect women and this is one of the major reasons of imbalance in the sex ratio of boys and girls.

But, the most striking revelation is that 21 million unwanted girls are born with a hope to get a son. The colour and the fact presented in the survey just highlights the deep bias against girls that is prevalent in our society.

With respect to the judiciary, I would like to say that timely justice can play an important role in encouraging the process of ease of doing business. Our finance minister has always said that we need to make several changes in contract enforcement so that ease of doing business comes into effect, in true spirit.

We have documented several things about delays and pendency. Interestingly, maximum of these delays are related to Income tax. Ironically, the biggest litigant is the government.

At a time when economic growth is picking up, there is a debate about why private investment is not picking up. The second debate is about jobs and why they are not growing. What is your view on both?
Truly, private investment has not increased as it should have. This is due to several reasons.  Companies that borrowed a lot failed to earn profit and due to this, banks had less  or no capital to lend. To address the problem, the government has taken essential steps like 12 cases have been sent to NCLT and IBC. In addition, the government also invested about Rs 80,000 crore in PSBs (Public Sector Banks.)

There is a debate that Short Term Capital Gains (STCG) tax timeframe can be tinkered or Long Term Capital Gains (LTCG) tax can be brought back in this budget. Sir, tinkering or bringing back STCG or LTCG, respectively, at least when everything is going fine will hurt the sentiments of the investors. What is your view on this?
See, anything I say will be interpreted that will it happen or not. But, you know that all these are important issues and treating all assets in a similar way is also a need of the hour. I think these are things on which the government is focused but I can't say that it will be discussed in this budget or the next.