In a major policy initiative aimed at benefitting farmers, the government has done away with the licensing permits for foreign vessels for coastal movement of agriculture, fishery and animal produce, besides allowing Indian citizens to charter ships for these, Union Minister Nitin Gadkari said 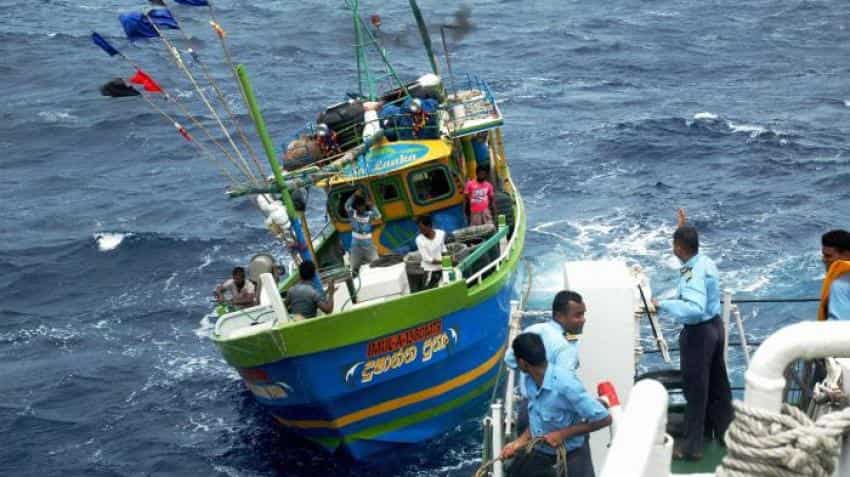 The move is also aimed at promoting processing of seafood at Indian hubs under Sagaramala initiative rather than processing of Indian seafood in Singapore before further exports to countries like Japan. Image source: PTI
Written By: PTI

In a major policy initiative aimed at benefitting farmers, the government has done away with the licensing permits for foreign vessels for coastal movement of agriculture, fishery and animal produce, besides allowing Indian citizens to charter ships for these, Union Minister Nitin Gadkari said. The move is also aimed at promoting processing of seafood at Indian hubs under Sagaramala initiative rather than processing of Indian seafood in Singapore before further exports to countries like Japan.

"We have done away with the licensing requirement for plying of foreign flag vessels by foreign players on the coastal line of India for four kind of cargos - agriculture, horticulture, fisheries and animal husbandry. We have also allowed chartering of foreign vessel by Indian citizens, Indian incorporated entities and Indian registered societies for this," Shipping Minister Gadkari told PTI. The main intent of the government's reform in the maritime sector is to see that farmers income increases and through lower logistic charges like transportation through sea would reduce costs, the minister said.

"It is in continuation of a large number of initiatives Government of India is taking to increase farmers' income in line with the Prime Minister's objective to double farmers' income," Gadkari added. The relaxation in licensing requirement has been given under section 407 of the Merchant Shipping Act 1958 and accordingly vessels with at least 50 per cent of total cargo onboard constituted by these commodities are not required to obtain a license from the Director General of Shipping for coastal trade.

"The relaxation has been undertaken to enable farmers to access a large market profitability, widen the range of goods to be marketed and lengthen the distance over which domestic trade can be conducted besides promoting trade and ease of doing business in India," the minister said. The government has already undertaken Rs 14 lakh crore Sagarmala initiative for port-led development of the country, he added.

Waterborne transportation is cheaper on a per kilometre basis with respect to transportation by rail or road and can profitably support movement of the produce to reach a wider geography of markets and be monetised, the minister noted. Currently, persistence of unidirectional demand leads to insufficient investment in the fleet and as a result inadequate availability of coastal vessels does not allow reliable and time bound services at Indian ports which is necessary for perishable goods, he added.

The minister also said that the initiative will further help in government's intent of promoting a mind-set shift from facilitating and protecting farmers, towards one that expands the market ecosystem. Shipping Secretary Gopal Krishna told PTI that the move will help farmers as presently South India, where majority of the cotton mills are located, depends mainly on road for transportation of cotton from Gujarat, which is costly since it is a seasonal business. Likewise wheat can be transported to the South from Gujarat through sea instead of present rail or road.
A shipping association official said many a times due to high transportation charges millers in South India prefer to import cotton from countries like Tanzania as it is cheaper to import from there.

The secretary said this "creates huge economic imbalance which goes against our Indian farmers". From the east coast a lot of sea food goes to Singapore where it is processed and then exported to countries like Japan, he added. "This could easily be arrested after this relaxation in licensing," he said, adding that food processing hubs can come up near ports. Last week, the government had also done away with licensing requirement for ships chartered by Indian citizens or companies for transportation of EXIM containers for transshipment purposes and to promote entrepreneurship.

The move was aimed at arresting diversion of Indian container cargo to transshipment hubs at foreign ports that have been swelled to 33 per cent, besides creating employment. At present transhipment hubs at Singapore, Malaysia, Colombo and Jabelali near Indian coastline gets about 33 per cent of the Indian container cargo, which is aggregated there before shipped to final destinations. If aggregation is done at Indian ports, jobs will be created, port charges will come and an ecosystem will be developed, Gadkari has said.