The move comes at a time when prices have surged sharply in various commodities including tomato, wheat and pulses. 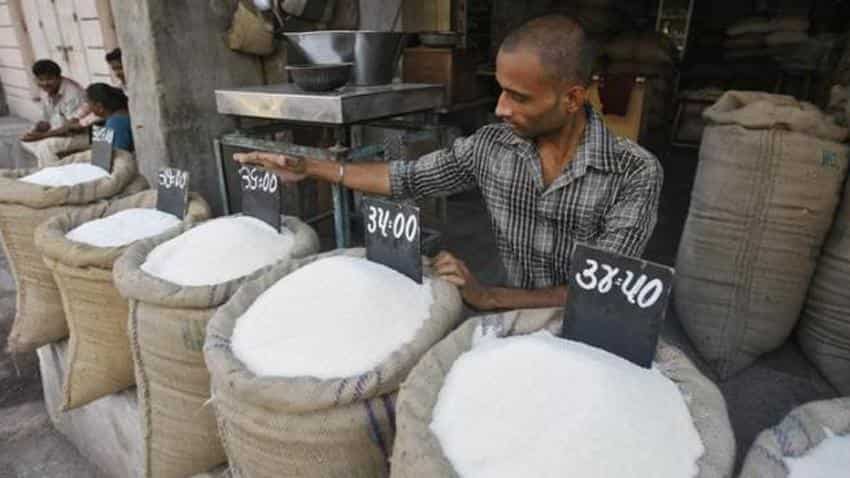 A vendor arranges a price tag over a sack filled with sugar at a wholesale vegetable market in Ahmedabad, Gujarat, India, on September 11, 2013. Image Source: Reuters/Amit Dave
Written By: PTI
RELATED NEWS

Government on Friday imposed 20% customs duty on sugar exports to boost domestic supply and check prices which are ruling high at Rs 40/kg.

The move comes at a time when prices have surged sharply in various commodities including tomato, wheat and pulses.

"To keep the domestic prices of sugar under check, the government has decided to impose export duty of 20% on the export of raw sugar, white or refined sugar," the Finance Ministry said in a release.

A decision has been notified by the Central Board of Excise and Customs (CBEC), it said.

The duty has been imposed to restrict exports following sharp rise in global prices. The duty is, however, lower than 25% proposed by the Food Ministry.

India, the world's second largest sugar producer after Brazil, has exported 1.6 million tonnes of sugar so far in the 2015-16 marketing year (October-September). Further exports are unlikely to take place with this decision.

With retail sugar prices soaring to around Rs 40/kg from Rs 30/kg six months ago, the government has taken various steps to contain prices including withdrawal of export-linked production subsidy and imposition of stock limits on traders.

Last week, Food Minister Ram Vilas Paswan had announced that his ministry has proposed to "levy 25% custom duty on export of sugar" to keep exports under control.

"Global sugar prices are rising and therefore traders may increase the export of sugar to make profit," he had said.

However, a senior industry official welcomed the decision in view of tight demand-supply situation expected in the next 2016-17 marketing year starting October.

With imposition of export duty, the official said that exports have become unviable.

An increase of 50% in global sugar prices in last three months due to disruption in supply from Brazil had made exports viable.

Moreover, the government has forecast further decline in output in next year at 23-24 million tonnes. However, it has maintained that there would be no shortage as the country would have the opening stock of 7 million tonnes at the start of the next marketing year, taking total availability to 30-31 million tonnes.

Stock Market Outlook: Focus will be on these - Check what share bazaar experts, analyts opined