Petrol and diesel are the mainstay for Oil Marketing Companies (OMCs), accounting for about 51% of the total petroleum product consumption in India as of FY17. 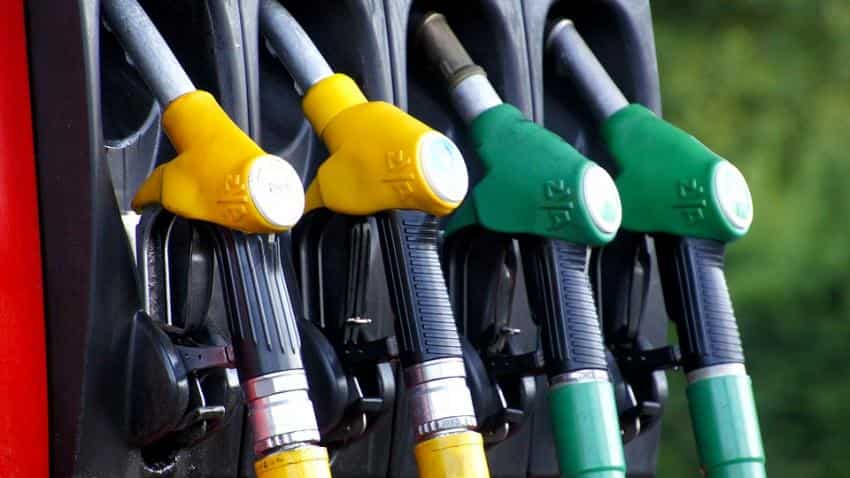 In order to benefit consumers, the government had linked petrol and diesel prices with international markets last year, but rising prices of fuel products by nearly Rs 2 per litre in just 16 days has rather added to their woes.

According to Indian Oil Corp data, petrol prices have surged by nearly Rs 3 per litre in four metro cities.

Mumbai has seen the highest rise in petrol price to Rs 2.63 per litre from December 31, 2017 to till date, followed by Chennai witnessing Rs 2.40 per litre hike in petrol during the same period.


The petrol prices in Delhi and Kolkata have also surged by Rs 2.24 per litre.

Similar is the case with diesel prices in these cities, with Chennai recording Rs 1.36 per litre rise, and Delhi witnessing a hike of Rs 1.30 per litre.

Mumbai and Kolkata also saw a jump in diesel prices by Rs 1.28 per litre. One of the key reasons for rise in fuel products can be attributed to global crude oil prices which have jumped to over three-year high.

Currently, the spot brent price is near $70 per barrel and that of spot West Taxes Intermediate (WTI) is trading over $64.30 per barrel. 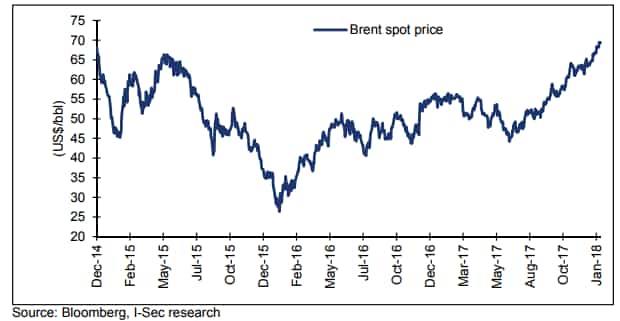 ICICI Securities said that the consistent decline in US oil inventories over the past several weeks and decline in US oil production from January 5, 2018 due to severe weather conditions have pushed oil prices higher.

Care Ratings said, “Quite clearly this group of products is very important for the government for raising revenue. Presently it appears that the government would rather not lower the tax rates as it would impact revenue collections.”

It further said that higher prices of crude oil will increase the trade deficit and put pressure on the rupee.

From this scenario, one thing is clear that Indian government cannot afford to see its fiscal deficit target hampered due to crude oil prices.

The second option to maintain momentum in revenue collection would be the excise duties and VAT charged on the fuel product.

In the last fiscal (FY17), the government received 23% of its revenue from the oil and gas sector.

Petrol and diesel are the mainstay for Oil Marketing Companies (OMCs), accounting for about 51% of the total petroleum product consumption in India as of FY17.

Earlier in October 2017, the Finance Ministry trimmed down excise duty by Rs 2 per litre and asked states to lower down their Value Added Tax (VAT) on fuel products to boost consumer demand.

When the government lowered excise duty, Moody’s Investors Services stated that falling retail prices could stimulate demand for petrol and diesel in India, which will be credit positive for oil marketing companies as it will result in higher earnings.

From the above data, one can understand that higher crude oil prices just account for 37% and 43% in the actual petrol and diesel prices.

This means the remaining 63% and 57% of the final retail prices in petrol and diesel are still accounted by taxes levied by the government.

So here’s how the government is saving its revenue from making end users pay higher prices on petrol and diesel.

SC Tripathi, former petroleum secretary, earlier said, "One key thing that hampers India's fuel is the amount of taxes being charged currently. Petrol and diesel prices do not come under the umbrella of Goods and Services Tax – which proclaims the agenda of 'one tax one nation'."

Firstly, with the reduction in excise, the ministry has already indicated to bear revenue loss of Rs 13,000 crore by end of FY18.

According to India Ratings, state governments' adjustment on VAT highlights that the aggregate impact on the revenue would be down by an additional Rs 9,750 crore by end of FY18.

Ind-Ra says, “At the aggregate level, 16.6% of the states’ own tax revenue come from petroleum products. However, for some states such as Assam, Gujarat, Manipur and Rajasthan it is more than 20%.”

According to ICICI Securities, "Steeper retail price hikes have been made in states like Maharashtra, Gujarat and Madhya Pradesh where VAT was also cut in addition to excise duty cut made on 04-Oct’17.”

Companies like Reliance Industries, Cairn India Ltd, Oil India, Oil and Natural Gas Corporation (ONGC) among others in this sector are responsible for producing oil in its crude form. Together, these companies cater 25% of India's crude requirement, while the rest is imported.

This crude is then purchased from Oil Marketing Companies (OMCs), which handle oil from their crude stage till the time it is handed to dealers in its refined form.

Oil prices at seven-month low but no change in petrol, diesel prices in India