As on March 2017, the total number of LPG connections stood at 19.87 crore, an addition of 3.25 crore new connections over the previous year. 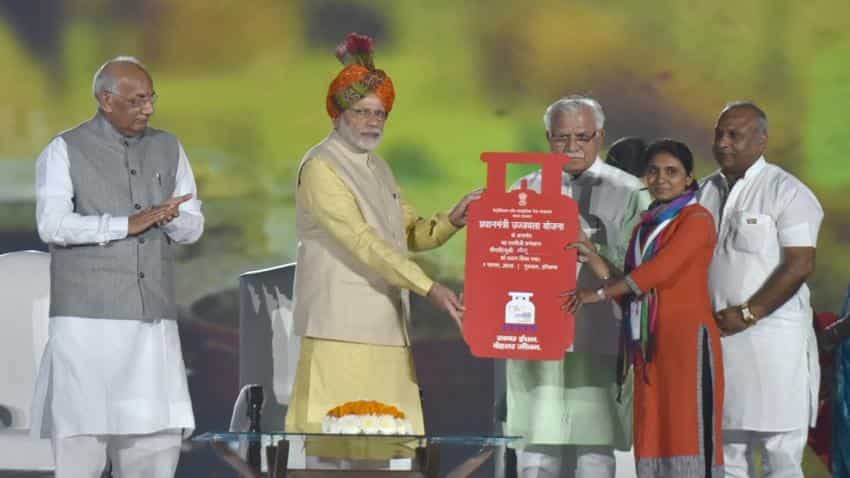 Prime Minister Narendra Modi distributes the LPG connections to the beneficiaries to mark recognition of 8 districts as Kerosene-free in Haryana during Haryana Swarna Jayanti celebrations in Gurugram on Nov 1, 2016. Photo: IANS
Written By: PTI
RELATED NEWS

Now use Ola Money to pay for fuel, LPG at Bharat Petroleum outlets

Surpassing its target in the first year for connections under Pradhan Mantri Ujjwala Yojana (PMUY), the government is aiming to ramp up the LPG coverage in the country to 95.49% by 2018-19 from 72.8% now through the three PSU oil marketing companies.

"There is a plan to issue three crore connections in the current fiscal and additional four crore in 2018-19 which will increase the LPG coverage to 95.49 per cent taking the total active connections to 26.87 crore," sources said declining to be quoted.

The number is not yet finalised by the government, they said.

As on March 2017, the total number of LPG connections stood at 19.87 crore, an addition of 3.25 crore new connections over the previous year.

There has been sharp spurt in connections due to PMUY scheme that added 2.2 crore connections in 2016-17 by the PSU oil marketing companies surpassing the oil ministry target of 1.5 crore.

The ministry had initially targeted to add five crore new connections offering deposit free connections to BPL households till 2018-19 identified through the Socio-Economic Caste Census (SECC). The connections under the scheme is issued only to women.

Ministry figures show 40% of PMUY target had been met but it was aiming for greater impetus in the remaining period of the scheme till March 2019 to expand coverage.

In West Bengal the LPG coverage rose to 67% from 51.5%, a PMUY district nodal officer S Jha said. However, it remains short of national average of 72.84%.

Now use Ola Money to pay for fuel, LPG at Bharat Petroleum outlets