Good news for your home loan EMIs? Will you pay less now? Find out 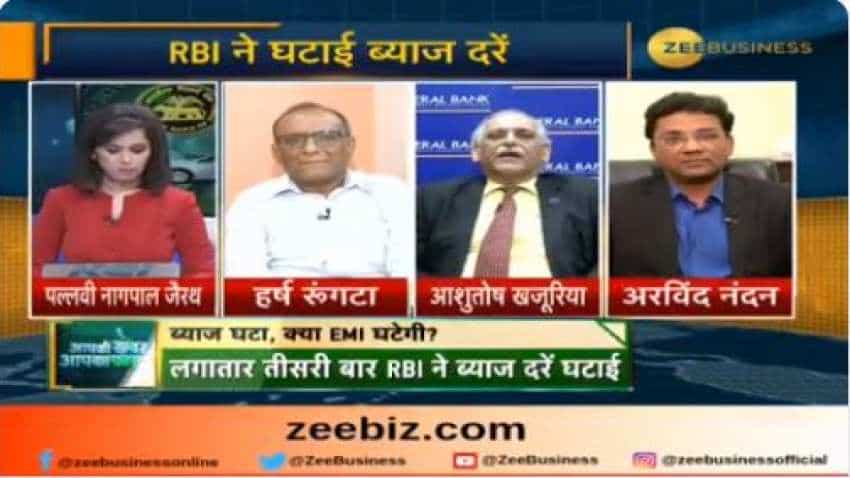 Notably, bankers have hailed the third successive rate cut by the apex bank as the move is likely to boost growth. Image source: Twitter/Zee Business

The Reserve Bank of India (RBI) today cut the repo rate by 25 bps to 5.75 per cent and reverse repo rate to 5.50 per cent. The decision to cut interest rates for the third time this year--the lowest level in nine years-- is likely to encourage banks to transmit these to home, auto and other loan borrowers faster. Will banks follow this move and reduce home loans borrowers burden of EMIs. Zee Business TV raised this question before experts, including Ashutosh Khajuria, CFO, Federal Bank; Investment advisor Harsh Roongta; and Arvind Nandan of Savills India, in AapkiKhabar Aapka Fayda programme to understand impact of the RBI Monetary Policy announcement.

According to Ashutosh Khajuria, banking system has rigidity in their balance sheet therefore, they find it difficult to implement the rate cut benefits to customers immediately. He also referred to fixed deposits in banks, to make it understand, saying repo rate cut generally does not affect FDs.

Referring to RBI Governor Shaktikanta Das' statement in which the latter expressed confidence that banks would pass on the benefits to consumers on the basis of the fact that out of earlier cuts, since January, 0.21 per cent has been passed on to customers.

Harsh Roongta, however, partially agreed with Ashutosh Khajuria and said that till banks agree to pass on benefits to customers the reforms would be difficult to come in practice.

Arvind Nandan said that if rate cut benefits are passed on to customers it will help in increasing the purchasing power of customers. He, however, said that for the country, both investment as well as consumption are necessary. He added that this is needed on both sides to maintain robust demand and supply.

Notably, bankers have hailed the third successive rate cut by the apex bank as the move is likely to boost growth. They, however, remained non-committal on the specifics of how they intend to pass on the benefits to the borrowers.

After the policy review, governor Shaktikanta Das hailed banks' effort on transmission, but asked them to do more through "higher and faster" lending rate cuts to help boost demand in a slowing economy, adding that bankers have so far passed 0.21 percent of the 0.50 percent rate cuts since January, going by the weighted average lending rate but this has helped only new borrowers and not those already are in the credit market.

Soon, more White Label ATMs near you! RBI has announced this big change