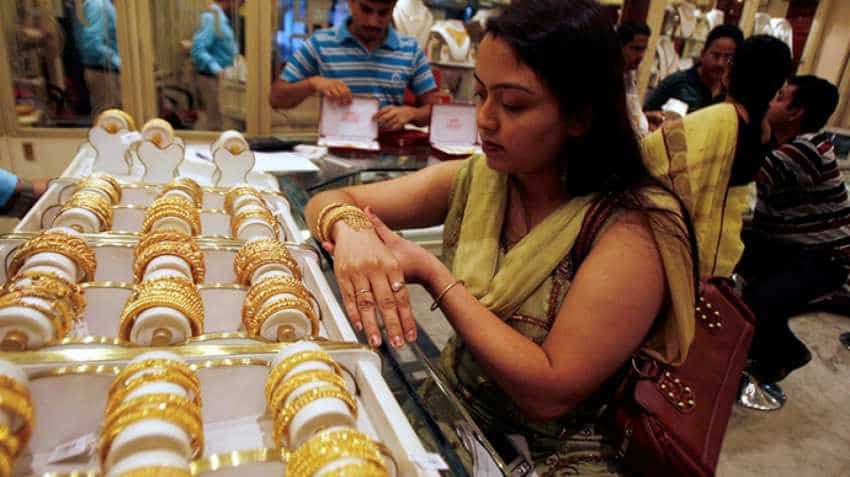 Gold prices: On account of slipping dollar index at Forex and soaring crude oil prices in the global commodity markets, the gold is expected to continue its rally at the Multi Commodity Exchange (MCX) this week. Experts say that the precious yellow metal is expected to touch the Rs 32,300 levels by the end of this week. If the brent crude touches the levels of $70 per barrel, then gold may touch further high but if there is ease in Brent Crude price globally, commodity investors have been advised to book profits.

Commenting upon the reason for the rally in gold prices at the MCX Sugandha Sachdeva, Vice President, Religare Commodities told Zee Business online, "Globally gold may cross its seven month high this week due to dollar index continuously going downwards and Fed chief's dovish tone on the rate hike." On gold prices position for investors at the MCX Sugandha of Religare Commodities said, "This week, gold is expected to touch Rs 32,300 levels. Those thinking of buy position in gold should buy the future gold at around Rs 31,780 levels having a stop loss at Rs 31,600."

On co-relation between crude and gold or crude being the engine of gold at commodity exchange Sugandha Sachdeva said, "This is due to the rupee-dollar deviation being the reason for rise in both commodities but it's not a direct correlation. In fact, it's an indirect correlation."

Asked about the rupee-dollar deviation in coming week Anindya Banerjee, Analyst at Kotak Securities told Zee Business online, "Any appreciation in rupee would be mainly due to the outside reasons. On the domestic front, the rupee has little chances to recover the lost ground as we are heading for next general elections and the government is under huge stress to overcome the slacked economic growth and rise in fiscal deficit." He said that if the Brent Crude prices touch the $70 per barrel levels, then we can see the rupee at around Rs 73 per dollar.