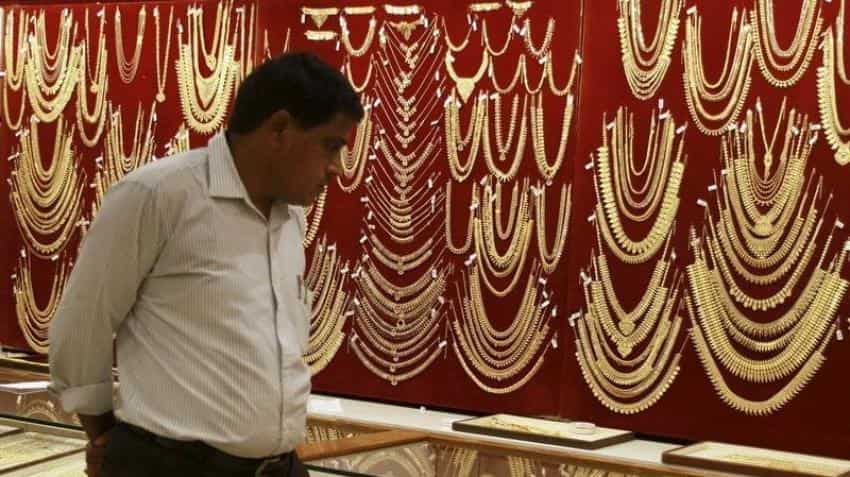 A customer looks at gold ornaments on display inside a jewellery showroom on the occasion of Akshaya Tritiya, a major gold buying festival, in Kochi. Image Source: Reuters

Gold prices rose on Thursday as the US dollar pared early gains and equities plunged on Chinese trade data that stoked concerns about the health of the world's number two economy.

The climb in bullion came despite signals from the US Federal Reserve minutes that the central bank could raise interest rates in December.

"Despite the FOMC minutes that were released overnight, gold prices didn't really move. This strongly suggests that gold prices at this juncture, of $1,250, have already digested the probability of a rate hike around this year," said OCBC Bank analyst Barnabas Gan.

Several voting Federal Reserve policymakers judged a rate hike would be warranted "relatively soon" if the US economy continued to strengthen but doubts on inflation remained, according to the minutes of the Fed's September policy meeting released on Wednesday.

Gan added that various headwinds to the global economy would buoy safe-haven demand for bullion, with the metal likely to touch $1,300 by year-end.

China's September exports dropped 10% from a year earlier, far more than markets had expected, while imports unexpectedly shrank 1.9% after an encouraging bump up in August, official data showed on Thursday.

The dollar index, which measures the greenback against a basket of six major currencies, fell 0.1% to 97.879.

"There is a lot of buying on the physical side in Asia, mainly from China and buying from exchange traded funds (ETFs) after recent dips," a precious metals trader with a China-based bank said.

Spot gold may break support at $1,250 per ounce and fall to its October 7 low of $1,241.20, driven by a wave five, according to Reuters technical analyst Wang Tao.