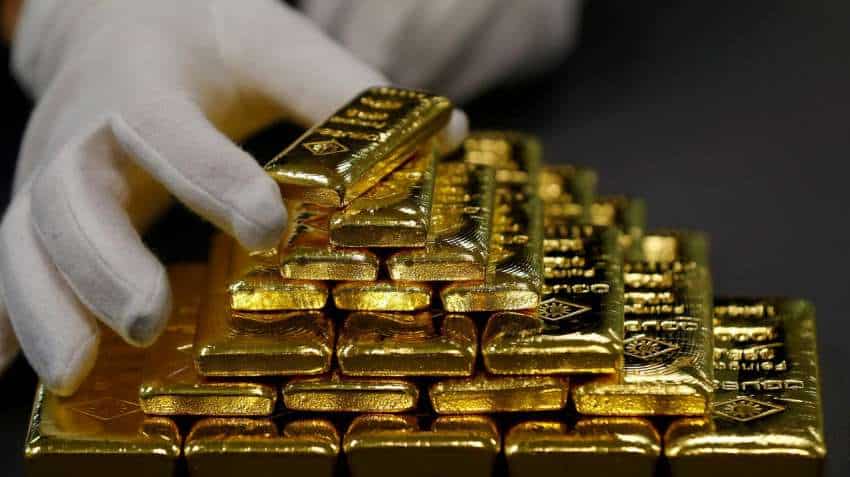 In the international market also, both gold and silver were trading lower at USD 1,579 per ounce and USD 18 per ounce, respectively. Source: Reuters
Written By: ZeeBiz WebTeam
Edited By: Harish Dugh
RELATED NEWS

"Spot gold for 24 Karat in Delhi fell by Rs 162 pressured by rupee appreciation. The spot rupee was trading around 11 paisa stronger against the dollar during the day," HDFC Securities Senior Analyst (Commodities) Tapan Patel said. "Global investors are weighing the effect of China's coronavirus outbreak," he added.

In early trade on Tuesday, the rupee appreciated by 6 paise to 71.37 against the US dollar.

In the international market also, both gold and silver were trading lower at USD 1,579 per ounce and USD 18 per ounce, respectively.

Global turmoil to be good for gold: Reuters poll

Gold prices will hold above $1,500 an ounce this year and make modest gains in 2021 as low-interest rates and geopolitical uncertainly bolster its appeal, while silver prices will begin to catch up, a Reuters poll showed on Tuesday.

Gold is traditionally seen as a safe store of value during times of turmoil and becomes more popular when other assets offer low returns.

The metal is pushing towards $1,600 and its highest since 2013 as an outbreak of coronavirus in China threatens to disrupt economic activity.

The poll of 36 analysts and traders, mainly conducted before coronavirus hit the headlines, returned a median forecast for gold to average $1,546 an ounce this year and $1,575 in 2021.

The prediction for 2020 is $9 higher than in a similar poll conducted three months ago and compares with an average price of $1,394 last year.

"Gold has re-established its safe-haven status," said Standard Chartered analyst Suki Cooper. "We expect gold to test seven-year highs in 2020, even though we see the U.S. Federal Reserve on hold throughout the year."

"Longer-term risk-hedgers are expected to remain in the market, providing a cushion for any price weakness," said INTL FCStone analyst Rhona O`Connell.

Silver last year rose 15% -- its biggest annual gain in three years -- and on Tuesday traded around $18. The poll three months ago predicted prices would average $18.13 in 2020.

While it shares gold`s role as a perceived safe-haven asset, silver is also used in industries such as electronics and solar panels.

Weakening economic growth and industrial activity last year slowed silver`s rise, with gold at one point costing 93 times more than silver -- the largest multiple since the 1992.

That ratio will fall to an average of around 85 this year and 83 in 2021, the poll suggests, helped in part by better prospects for industrial consumption.

"We anticipate that a small uptick in global industrial growth will amplify any upward pressure on silver demand," said Caroline Bain, an analyst at Capital Economics.