GHMC Elections Results: BJP is saying thanks to Hyderabad for the saffron surge in GHMC polls! It is an impressive performance by BJP in Greater Hyderabad Municipal Corporation (GHMC) elections 2020. 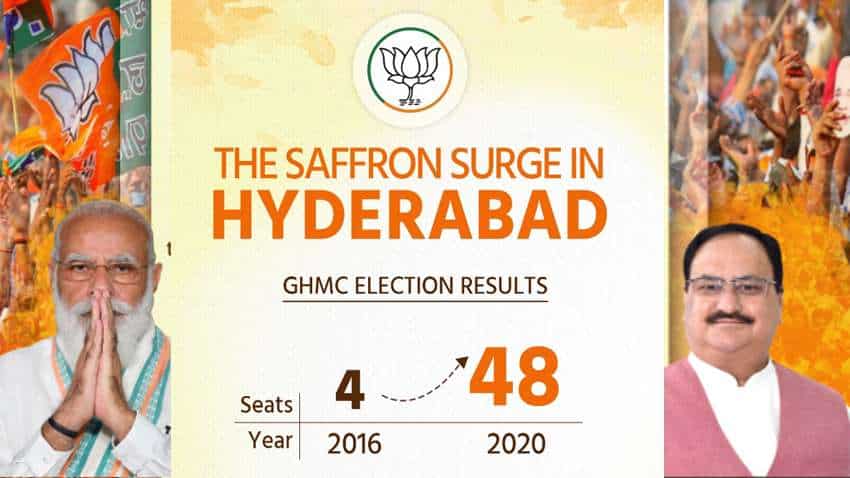 GHMC Elections Results 2020: BJP is saying thanks to Hyderabad for the saffron surge in GHMC polls! It is an impressive performance by BJP in Greater Hyderabad Municipal Corporation (GHMC) elections 2020. From just four seats in 2016 to 48 divisions in 2020 under its belt, BJP has emerged as the main challenger to TRS.

Thank you Hyderabad for the saffron surge in GHMC polls! pic.twitter.com/wMpbkidqT9

Coming close on the heels of its victory in Dubbak Assembly by-election, the BJP's impressive show in GHMC elections results has given credence to its claim as the sole alternative for the TRS as well as an impetus to its dream march in the south.

We thank the people of Hyderabad for showing their trust in the politics of development led by PM Shri @narendramodi.

We congratulate every BJP Karyakarta on this stupendous achievment in GHMC polls. pic.twitter.com/qEf5CAUAKF

Political analysts say the saffron party with big gains has emerged as a dominant force in the state with its eyes set on the ultimate goal of winning 2023 Assembly polls and turn Telangana into second gateway to South India after Karnataka.

It was for this reason that the BJP leadership focused on GHMC campaign. Central Ministers including Amit Shah, party president J.P. Nadda and Uttar Pradesh Chief Minister Yogi Adityanath campaigned for the party candidates for the civic body polls.

The analysts say TRS defeat in Dubbak and the setback in GHMC proves there is anti-incumbency and BJP has used this to its advantage thus replacing Congress as the main opposition.

Despite emerging as the single largest party with 55 seats in 150-member Greater Hyderabad Municipal Corporation (GHMC), Telangana Rashtra Samithi (TRS) has more reasons to be worried about by the poll outcome.

The Bharatiya Janata Party (BJP) may not have captured GHMC in the fiercely contested polls but it sent the alarm bells ringing within the TRS.