This unparalleled tragedy is likely to set Kerala's gross domestic product back by nearly a percentage points in this financial year, said rating agency CARE, which added that the state’s GDP is expected to fall to 6.5 per cent to 7 per cent from budgeted 7.6 per cent. 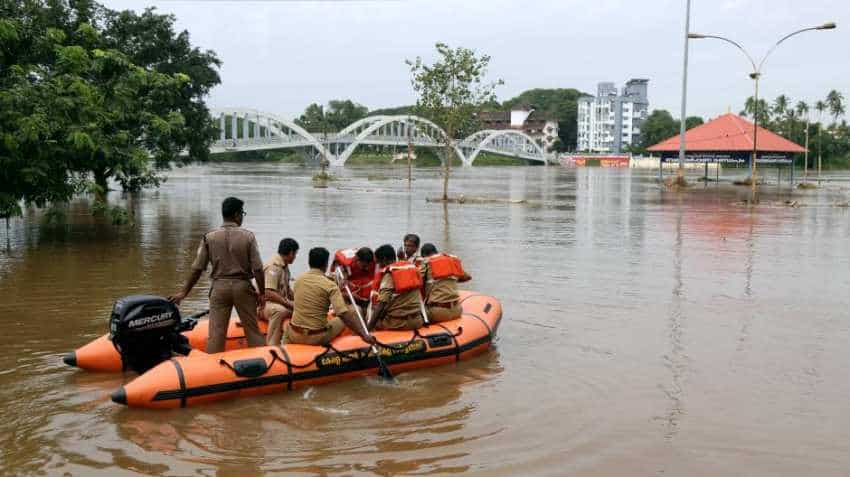 Rain fury in Kerala caused unprecedented floods in the state that destroyed property, agriculture, and infrastructure besides killing over 370 people. Image source: Reuters

Rain fury in Kerala caused unprecedented floods in the state that destroyed property, agriculture, and infrastructure besides killing over 370 people. Nearly 14.50 lakh people from 3.91 lakh families are still in about 3,879 relief camps across the state, according to the Disaster Management State Control room.

This unparalleled tragedy is likely to set Kerala's gross domestic product back by nearly a percentage points in this financial year, said rating agency CARE, which added that the state’s GDP is expected to fall to 6.5 per cent to 7 per cent from budgeted 7.6 per cent.

The CARE report released on Tuesday stated that the damage to roads could be as high as Rs 12,000 crore, while the figure for airports is nearly Rs 40 crore. Citing damages to Kerala's plantation sector and tourism — that contribute the most to its economy, the report said the rubber industry is staring at an estimated loss of Rs 420 crore while the tea industry would bear the loss of Rs 35-40 crore.

The Ratings estimate that employment of nearly 41.3 lakh individuals in districts like Idukki, Ernakulam, Kollam, Kottayam, and Pathanamthitta has been affected. It expected wage loss of around Rs 4,000 crore for August (based on the average wage rate of Rs 400 per day for Kerala as per the data from the annual report for 2017-18 of the union ministry of labour).

CARE Ratings economist Dr Rucha Ranadive stated that the state will have to bear the cost of rebuilding and it will be a massive drag on the government’s budgetary plans, while adding, “The government would require relief support from the Centre, will have to increase its borrowings and seek concessions/leeway for fiscal consolidation especially for attaining the targets set by the Finance Commission to fund the reconstruction."

Credit growth this time could grow by 17 to 21 per cent over past financial year assuming all average rebuilding expenditure by households of the order of Rs 50,000 to Rs 1 lakh per unit is financed by banks, said the CARE report, adding that It is likely that a large part could be from non-banking finance companies.

The report further stated that Kerala’s finances are likely to be under pressure following the rise in expenditure towards flood relief and reconstruction, but the government income could see some moderation. The revenue deficit would reportedly widen further against the budget estimate of Rs 12,860 crore and the fiscal deficit too would increase from the budget estimate of 3.1 per cent of state’s GDP.

"The state debt too is likely to surge and may have to resort to increased market borrowings from the budget estimate of Rs 1.6 lakh crore. Every Rs 1,000 crore spent over and beyond what has been budgeted as flood relief will widen the revenue deficit by 0.12 per cent of gross state domestic product," the report added.

Meanwhile, the state government has sought a relief package of Rs 2,600 crore under the MNREGS scheme and also under centrally-sponsored programmes. The chief minister reportedly informed Prime Minister Narendra Modi during his visit to the flood-affected areas on Sunday, that Kerala had suffered a loss of Rs 19,512 crore as per preliminary estimates and only after water recedes the exact loss and damage could be assessed.

Notably, the state had sought an immediate relief of Rs 2,000 crore to take up relief works and the Centre sanctioned Rs 500 crore to the state.