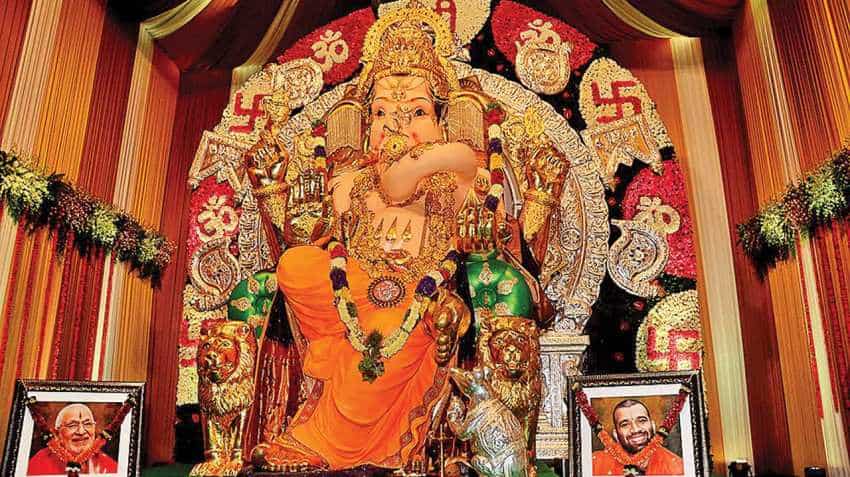 The insurance cover will remain in effect from the day of Ganesh Chaturthi until the ornaments are safely deposited in the bank, DNA quoted a member of the GSB as saying. Image: DNA

The GSB mandal at Kings Circle will unveil its 14.5 feet tall idol adorned with over 68 kg of 22-carat gold and 327 kg silver, besides expensive diamond-studded jewelleries, including many articles donated by devotees.

Ganesh Chaturthi 2018 will be celebrated on Thursday. At Gowd Saraswat Brahman Ganesh Mandal, the Ganpati idol is adorned with dazzling gold ornaments. Every year, the GSB celebrates five-day Ganesh Chaturthi, while other big mandals of Mumbai immerse the idol of the deity on the 10th day.

GSB celebrations are thus insured at Rs 52.85 crore per day. According to the report, the GSB's insurance covers for all devotees and the deity’s ornaments against incidents like terror attacks, accidents, burglary or external damage. Rs 224.40-crore cover is for personal accidents, including that of volunteers and workers, at Rs 10 lakh per person. The pandal, including the CCTV, furniture and fixtures, grocery, fruits, vegetables and computers has been covered from fire, natural calamities, riots, strike, rail or road damages, electrical damage, earthquakes.

The insurance cover will remain in effect from the day of Ganesh Chaturthi until the ornaments are safely deposited in the bank, DNA quoted a member of the GSB as saying.

Maharashtra is all set to celebrate Ganeshotsav, its biggest festival starting Thursday. This year, Ganeshotsav has coincided with the Jain holy month of fasting during Paryushan, the ongoing week-long Mt. Mary Church annual fair in Bandra while Muslims will observe Muharram on September 20.

Ganeshotsav is now in its 126th year. It was started on a modest note by freedom fighter Lokmanya Bal Gangadhar Tilak in 1893 to rally the masses against the British rule.

Around 300,000-plus big and small idols of Lord Ganesha are installed in the city and across Maharashtra, reports IANS.

There are around 11,500 big-ticket Ganeshotsav associations with budgets of several crore or equivalent to small civic bodies, nearly 195,000 medium-scale with budgets ranging from Rs 500,000 to Rs 5 million, and lakhs of individual households and other private organisers with small budgets.Flowers are five times costlier, sweets especially 'modak' are more than double, dry fruits cost even higher, lighting and decorations are also much expensive.

Electric highway between Delhi and Mumbai! Nitin Gadkari reveals what government is planning