President of India Pranab Mukherjee delivered his address to Governors and Lt. Governors via video conferencing on January 5, 2017 where he gave his views on demonetisation and Indian economy. 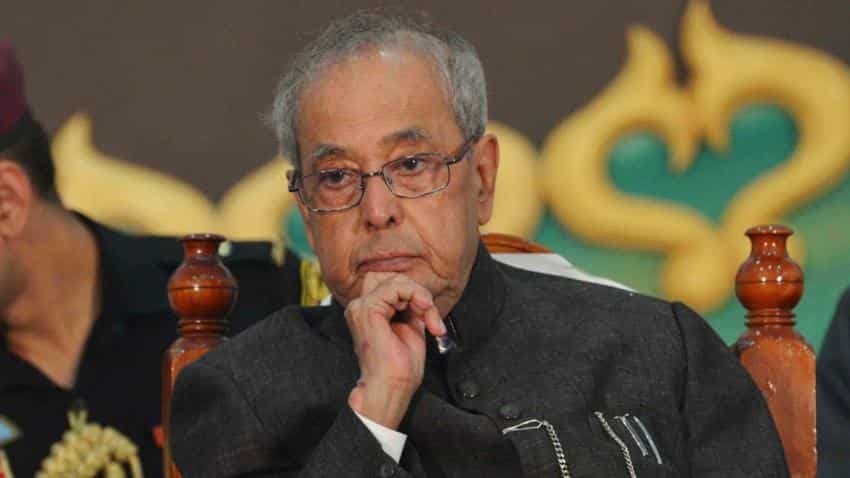 President of India Pranab Mukherjee delivered his address to Governors and Lt. Governors via video conferencing on January 5, 2017 where he gave his views on demonetisation and Indian economy. Pic: IANS
Written By: ZeeBiz WebTeam
RELATED NEWS

President of India Pranab Mukherjee delivered his address to Governors and Lt. Governors via video conferencing on January 5, 2017 where he gave his views on demonetisation and Indian economy.

Mukherjee, on the topic of demonetisation, said, "Demonetisation, while immobilising black money and fighting corruption, may lead to temporary slowdown of the economy." He said that the country will have to be extra careful to alleviate the suffering of the poor which might become unavoidable for the expected progress in the long term.

The President said while he appreciates the thrust on transition from entitlement approach to an entrepreneurial one for poverty alleviation, he is not too sure that the poor can wait that long. "They need to get succour here and now, so that they can also participate actively in the national march towards a future devoid of hunger, unemployment and exploitation," Mukherjee said.

My dear Governors and Lt. Governors:

1. Let me begin by extending warm greetings and best wishes to you for a year full of peace, prosperity and happiness.

2. The year that has just gone by was a year of mixed fortunes. It began on a very promising note with the economy performing well, overcoming the weak global economic trends. GDP growth of 7.2 percent in the first half of 2016-17 – same as that of last year – is a pointer to the fact that our economic recovery has been on solid grounds. In 2014 and 2015, below normal rains had caused rural distress. A good monsoon in 2016 is expected to improve agricultural production and increase rural employment and incomes. Though our exports have been affected by weak global demand, we have a stable external sector. Reviving exports will remain a challenge but we can overcome it by improving the competitiveness of the domestic industry.

3. Demonetisation, while immobilizing black money and fighting corruption, may lead to temporary slowdown of the economy. We all will have to be extra careful to alleviate the suffering of the poor which might become unavoidable for the expected progress in the long term. While I appreciate the thrust on transition from entitlement approach to an entrepreneurial one for poverty alleviation, I am not too sure that the poor can wait that long. They need to get succour here and now, so that they can also participate actively in the national march towards a future devoid of hunger, unemployment and exploitation. The recent package announced by the Prime Minister will provide some relief.

4. This year, there will be elections in as many as seven states. The dates for elections in five states have already been announced. The conduct of free and fair elections has made our democracy one of the most vibrant in the world. Elections reflect the attitudes, values and beliefs of the people towards their political environment. They symbolize the sovereignty of the people and provide legitimacy to the authority of the government. They also serve the purpose of regulation of public policies and mobilization of public opinion.

5. As we have all experienced, elections are usually marked by competitive populism, electoral rhetoric and vote bank politics. Noisy debates can deepen the fault-lines in the society. You, as Governors and Lt. Governors, command respect and attention of the people of your state. Through your interaction and wise counsel, you can play an important role in easing the tensions in the society. Goodwill must prevail between different communities. At times, harmony may be put to test by vested interests. Communal tensions may rear their ugly head. Rule of law must form the sole basis of dealing with any such challenging situation.

6. In a pluralistic democracy like ours, tolerance, respect for contrary views and patience are a must. These values have to be preserved. India is a multi-faceted nation of 1.3 billion people, 122 languages, 1600 dialects and 7 religions. In the words of Pt. Jawaharlal Nehru which I quote: "It is a country held together by strong but invisible threads” (unquote). India’s strength lies in her diversity. The multiplicity in culture, faith and language is what makes India special. There will always be divergent strands in public discourse. We may argue. We may disagree. But we cannot deny the prevalence of multiplicity of opinion. You can, through your calm influence, inculcate amongst the citizens of your state this fundamental ethos of our civilization.

7. You are the first citizens of your states. When you assumed this exalted office, you had taken an oath to protect, preserve and defend the Constitution. This pious document protects the liberty of the people and promotes the well-being of the citizens. It decrees inclusiveness, tolerance, self-restraint, and protection of women, senior citizens and weaker sections as essential ingredients of our polity. Our institutions of democracy must operate on these vital features. Strong credible institutions lead to good governance ensuring a healthy functioning of the democracy.

8. You all have a very important role to play in the improvement of higher education in your states. As chancellors and visitors of various universities, you can work with the academic leaders to effect holistic changes for quality up-gradation in the institutions of higher learning. I have been exhorting the academia to concentrate on attaining excellence through original research and technology development. A look at numerous social problems affecting millions of women and men in our farms and factories clearly shows that humane values have not yet become a dominant driver of our intellectual pursuits. This should receive your focused attention. Our interactions at the conferences at Rashtrapati Bhavan have yielded several positives in areas like: faculty sourcing and development; ICT for pedagogic refinement; research and innovation; industry-academia interface; and alumni involvement. I am aware of the good work being done by many of you in this field. Interaction amongst academic institutions can help spread best practices. These institutions can leverage knowledge and experience to the benefit of all. Your keen interest can rejuvenate a sector that is best positioned to support an innovation-led knowledge economy.

9. Another area where I envisage a role for you is in promoting art and culture in your respective states. As I have said elsewhere, art and culture are our link with the past. They provide the foundation for our current thought and by extension, the platform for our future action. They also provide a stable base to life and make it possible for us to have a joyous existence. With art and culture, we can experience life in its fullest and most meaningful form. They add to the overall happiness and well-being of the society.

10. Before I conclude, I express my deep appreciation to you all for coming together on this platform for our interaction. Within the limited time available, let us share some of our key concerns. I do look forward to our extended interface in the Governor’s Conference, when we will have the time to hear each one of us in detail.