Inter-state trade of farm products in mandies (wholesale markets) through the eNAM platform is gathering pace with the latest transaction taking place at Gujarat's Palanpur mandi, which sold green gram to Sumerpur mandi of Rajasthan. 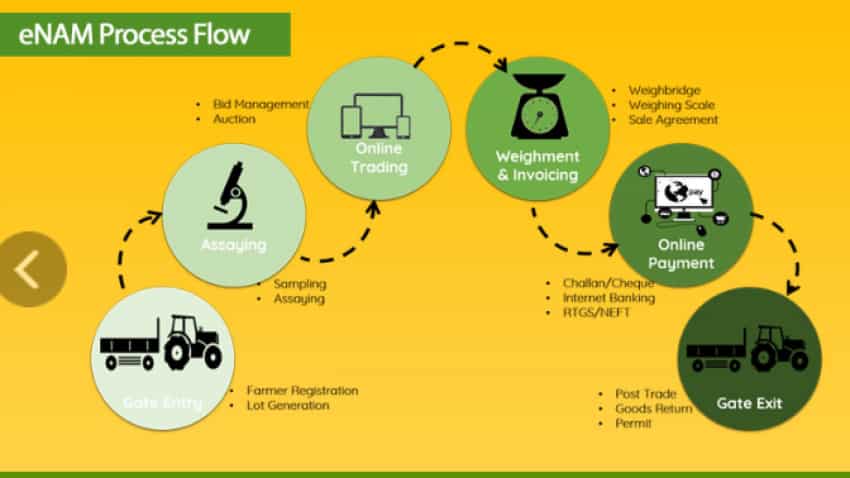 Inter-state trade of farm products in mandies (wholesale markets) through the eNAM platform is gathering pace with the latest transaction taking place at Gujarat's Palanpur mandi, which sold green gram to Sumerpur mandi of Rajasthan.

ENAM is a pan-India electronic trading portal which networks the existing APMC mandis to create a unified national market for agricultural commodities. The platform seeks to help farmers in getting better market access, find more buyers/traders for their produce and earn higher income. Small Farmers' Agri-business Consortium (SFAC) is the lead agency for implementing eNAM under the aegis of the Union agriculture ministry.

Trade in 585 mandis is currently taking place on the electronic network, which helps discover price in real time in a transparent manner. The government aims to integrate 200 mandis this year and another 215 next year with the e-NAM platform. There are about 2,700 APMC mandis and 4,000 sub-market yards in India.

Earlier, trade used to happen within the APMC (Agriculture Produce Market Committee) mandi or between two APMC mandies situated in the same state.

On the same day, another transaction in potatoes was carried out between a trader of Rudrapur e-NAM APMC of Uttarakhand and a farmer of Moradabad e-NAM APMC of Uttar Pradesh. In both the cases, e-payments have been made through e-NAM portal.

The latest development is from the Palanpur mandi of Gujarat which sold green gram to Sumerpur mandi of Rajasthan, a senior agriculture ministry official said.

Though the volumes of inter-state trade on e-NAM platform are low currently, the programme will prove to be a giant leap in reforming the agriculture market in India, the official added.

The ministry has integrated 585 wholesale regulated markets/ (APMC) markets in 16 states and 2 Union territories (UTs), who have carried out requisite reforms in their state APMC. Currently, seven states --

Farmers can access the information on e-NAM easily through their mobile phone from anywhere. This online trading platform aims at reducing transaction costs, bridging information asymmetry and helps in expanding the market access for farmers.

Logistics providers' information is also being provided on the e-NAM portal to traders from outside the state which will facilitate transportation of commodities.

The agriculture ministry is in the process of developing a separate dashboard to promote inter-state trade among e-NAM states.

There are also discussions ongoing among the officials of the ministry, SFAC and state governments on dispute settlement mechanism. Initially, the dispute has to be settled by the mandi of origin where the e-trade is going to be executed.

e-NAM agri marketing platform: These many mandis integrated with the online trading market