In a high-level review meeting with the entire Railway Board, all General Managers of Zonal Railways and Divisional Railway Managers, Goyal gave directions for the roadmap of forthcoming January-March 2019 quarter. 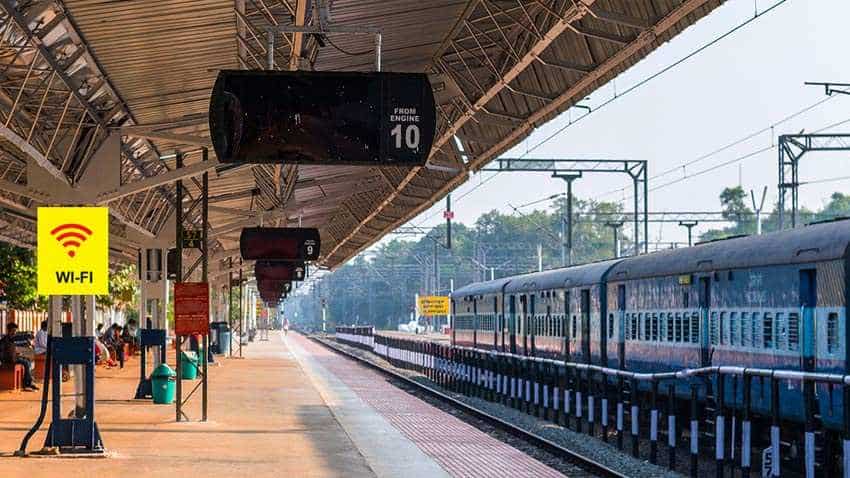 Free Wi-Fi: The Minister emphasizes on timely delivery and vigorous monitoring of Railway projects and activities.

In a high-level review meeting with the entire Railway Board, all General Managers of Zonal Railways and Divisional Railway Managers, Goyal gave directions for the roadmap of forthcoming January-March 2019 quarter asking officials to work towards completion of the goals as soon as possible.

Mentioning that the 723 Railway stations provided with wi-fi have proved very useful to the public, the minister directed that such wi-fi facility should be provided in at least 2000 Railway stations across the country in the near future and all stations ultimately. He said that Division Railway Managers will be suitably awarded for early completion of wi-fi works at stations.

The Minister emphasizes on timely delivery and vigorous monitoring of Railway projects and activities. "The deliberations covered subjects pertaining to safety, passenger services, passenger amenities, revenue generation, infrastructure development, staff welfare and transparency at all levels of functioning," said the ministry in a statement.

While reviewing the performance during the current year so far, the Minister gave following directions:

1. Time-bound work: Railway Minister called upon the top Railway officials to gear up their machinery to complete various projects and activities in a time-bound manner adhering to the notified deadlines.  The Minister called upon to focus on subjects pertaining to safety, passenger services, passenger amenities, revenue generation infrastructure development, staff welfare and transparency at all levels of functioning.

2. Online monitoring: Emphasising on the need to complete projects in time, Piyush Goyal mentioned that it is equally necessary to vigorously monitor the progress and suggested that an integrated dashboard portal displayable on a screen should be put in place by 15th January 2019. This needs to be done across the entire railway network and efforts are to be made for providing viewing access of this Dashboard to the general public also at the earliest.  The pictures of before and after works are to be uploaded online on regular basis at the Dashboard.

4. Catering Improvement: The Minster also advised that PoS Machines with swipe and bill generating machine should be distributed in all trains to each catering staff and TTEs by 31st March 2019.  He said that this will take care of the complaints of overcharging by the caterer.  All trains with catering facility should have rate list displaying prices of menu inclusive of GST and printed on a tin plate by March 2019.  The following lines also to be written on the tin plate - No tips please, if no bill, your meal is free.

5. Transparent Reservation System: With a view to making ticket booking further transparent, the Minister directed that reservation chart should be made available in the public domain as soon as possible. He also said that possibility of booking tickets even after scheduled departure of trains or after boarding the train should be explored if seats are available.

7. Revenue Generation: Talking about revenue generation, the Minister added that efforts should be made to increase incremental freight loading.  He also said that efforts for generating more non-fare revenue should be undertaken.  He said the targets for generating revenue from scrap disposal should be increased and all zones should strive to achieve ‘Zero Scrap Balance’ by the end of this financial year.

8. Station Development: Referring to station redevelopment the Minister said that redevelopment of 68 stations should be done till February 2019 with provisions to monitor their progress on integrated dashboard along with the current photographs.

9. Train upgradation: Emphasing on train upgradation, the Minister said that the work of retro-fitment and making Swarn & Utkrisht rakes should be expedited on a priority basis. Referring to the recently developed Vistadome coaches with all glass body for tourist purposes, the Minister said that such coaches could be introduced on more routes and directed all Railway divisions to assess their requirements urgently.

10. Cleanliness: On toilets, the Minister said that photographs of all completed toilets be uploaded from 4th January, 2019 onwards.  All toilets should be brightly lit, clean with an adequate supply of water and devoid of any broken pots/ urinals.  He also suggested that efforts should be made to provide Bio vacuum toilets in all the new coaches to be manufactured in the future.

11. Faster trains: He said that the trials of running Rajdhani trains using two engines (one in front and one in rear) on push-pull mechanism should be completed in time so that journey time of travel by Rajdhani could be reduced.

12. Station improvement: The Minister said that activities like LED lighting in cost-efficient manner, installation of CCTV in kitchens, retiring rooms etc., improving overall ambience and infrastructure in and around railway stations, installation of tall national flags in all A-1 category stations, display hoardings to achievements of railways in recent years should be completed in time.   He said that 3D Digital Museums at 100 stations should be completed before 15th February’ 2019.

13. Wi-Fi: Goyal directed that such wi-fi facility should be provided in at least 2000 Railway stations across the country in the near future and all stations ultimately.