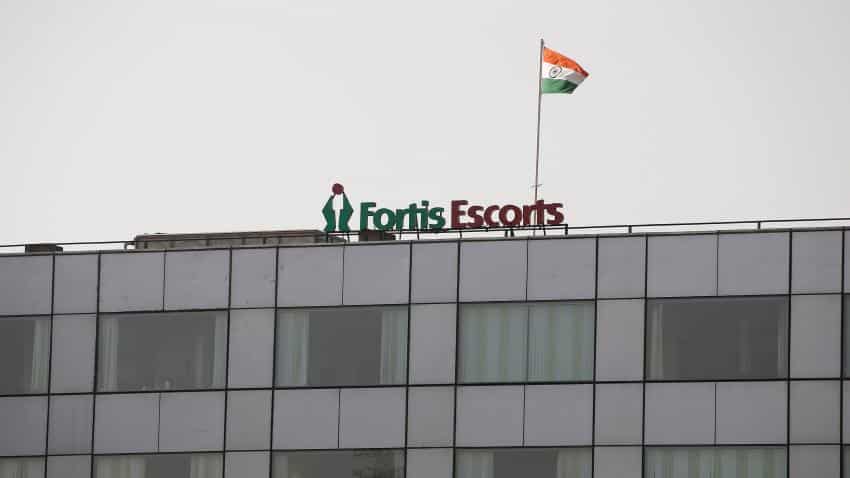 Fortis shares rose as much as 4.2 per cent to Rs 155 on NSE. Image source: Reuters
Written By: ZeeBiz WebTeam
RELATED NEWS

Fortis Healthcare share price rallied over 4 per cent after Manipal Hospital and private equity firm TPG Capital Management on Monday sweetened their bid to buy Fortis Healthcare, just days after the Fortis board said it favoured a rival offer to the dismay of many shareholders. Fortis shares rose as much as 4.2 per cent to Rs 155 on NSE, marking their biggest intraday percentage gain in nearly two weeks.

The decision drew investors' ire and sent shares in the cash-strapped hospital operator down almost 5 per cent.

It is uncertain if shareholders would give their nod to the offer from Hero Enterprise Investment Office and Burman Family Office, told an analyst to Reuters.

The keen interest in Fortis emerges as Indian Prime Minister Narendra Modi looks to implement a healthcare programme aimed at providing insurance cover to hundreds of millions of people in a country with a dearth of adequate medical clinics. The scheme is expected to make private hospitals, such as those run by Manipal and Fortis, accessible to millions of poor families.

Manipal said in a statement on Monday it would offer Fortis 180 rupees a share, valuing the company at 94.03 billion rupees ($1.39 billion).

The new offer is significantly better than any other offer or bid that Fortis has received to date, including the one by Hero and Burman, Manipal said in its statement, urging Fortis` board of directors to refer the offer to its shareholders.

"This is a real offer," a major shareholder in Fortis told Reuters. "This is getting in the territory of a fair bid."

"Given (Manipal) already runs a large hospital chain they are probably in the best position to ring out synergies," said the investor, adding Fortis had not yet entered into a binding bid and could change its recommendation to shareholders.

Fortis had initially agreed to a deal with the Manipal-TPG consortium, but shareholder objections and competing offers scuttled that deal.

"It's the first serious deal from Manipal that deserves full consideration," said another major shareholder in Fortis.

(With input from Reuters)