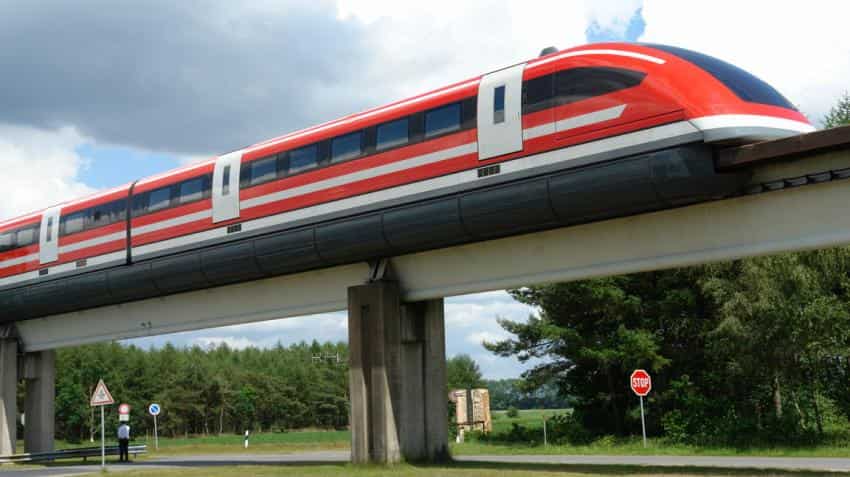 In this project the government will only be liable to provide the land. Photo: Wikipedia
Written By: ZeeBiz WebTeam
RELATED NEWS

After the Bullet train, now the government is planning to bring Magnetic Levitation or popularly known as MegLev train in the country, Sameer Dixit of Zee Business reports.

The government on Tuesday issued Expression of Interest to bring in ultra-high-speed train in the country, Dixit said.

Magnetic Levitation is a method where magnetic field is used to move vehicles without touching the ground.

According to a How Stuff Works report, "Maglev, means that these trains will float over a guideway using the basic principles of magnets to replace the old steel wheel and track trains.".

As per Dixit, the MagLev project will be based on Public Private Partnership model. The company itself will be responsible for laying the tracks.

In this project the government will only be liable to provide the land.

Gatiman Express- Currently, Gatiman Express is the fastest train in India, which was started in April. Reportedly, the train runs at a maximum speed of 160km per hour covering a distance of nearly 200 km in 100 minutes.

Bullet Train: The construction of India's first bullet train is already under way. The train will run from Mumbai to Ahmedabad. The Rs 97,636 crore bullet train project is expected to be completed by 2023.

As ZeeBiz had earlier reported, apart from Mumbai-Ahmedabad route, the second bullet train is likely to run from Delhi to Varanasi covering a distance of 782 km in two hours 40 minutes.

Talgo train: The Spanish Talgo train is currently on its final trial run phase. Once completed, the train will run between Delhi-Mumbai covering distance around 1400 km with a speed at 150 km per hour.

On July 14, the train had surpassed Gatiman Express, by running at a speed of 170 km per hour between Mathura and Palwal. This was during the second phase of the trial.