Prices of foodgrains, especially wheat and rice, will come down as they will be exempt from GST. Currently, some states levy Value Added Tax (VAT) on them. 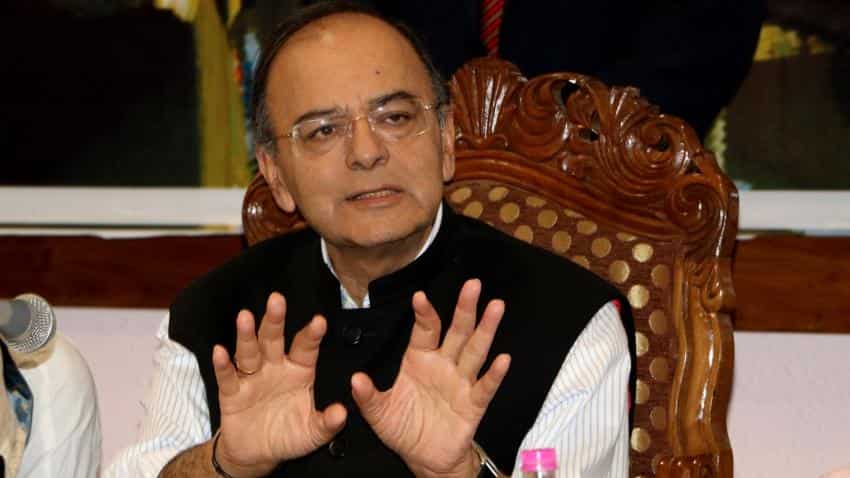 Union Finance Minister Arun Jaitley addresses a press conference after the first day of the GST Council meet at SKICC in Srinagar on May 18, 2017. Photo: IANS
Written By: PTI
RELATED NEWS

Foodgrains, cereals and milk will cost less from July 1 when the Goods and Services Tax (GST) is rolled out as the GST Council on Thursday decided to exempt these daily-use commodities from the levy.

Common use products like hair oil, soaps and toothpaste will be charged with a single national sales tax or GST of 18 per cent instead of present 22-24 per cent tax incidence through a combination of central and state government levies.

The GST rates for all but six items were finalised at the first day of the two-day meeting here of the GST Council, headed by Union Finance Minister Arun Jaitley and comprising state representatives.

Milk and curd will continue to be exempt from taxation when the Goods and Service Tax (GST) replaced current indirect taxes. 'Mithai' or sweets will attract 5 per cent levy.

Prices of foodgrains, especially wheat and rice, will come down as they will be exempt from GST. Currently, some states levy Value Added Tax (VAT) on them.

"We have finalised tax rates for majority of items as well as the exempt list (at today's meeting)," Jaitley told reporters here.

The GST rate for all but six out of the 1,211 items was decided on the first day, he said, adding the tax rate for items that would be decided tomorrow include gold, footwear, branded items and bidi.

"Rates have been finalised for the rest," he said. Also, the GST for packaged food items is to be finalised.

Today's meeting will also decide on the rate of tax for services, he said.

ACs and refrigerators will fall in the 28 per cent tax slab while life saving drugs have been kept at 5 per cent rate.

Jaitley said there will be no inflationary impact as most of the rates which are at 31 per cent have been brought down to 28 per cent.

Coal will attract GST of 5 per cent as against the current tax incidence of 11.69 per cent. "Cereals will be in exempt list. But what is to be done with packaged and branded food that has to be separately decided. We are yet to make a decision on that," he said.

Jaitley said the key feature of today's rate decision has been that "tax rate under GST will not go up for any of the commodities. There is no increase. On many commodities, there is a reduction particularly because the cascading effect of tax is gone."

"Of several commodities, we have consciously brought down the tax. In the overall basket there would be a reduction, but we are banking on the hope that because of a more efficient system, evasion would be checked and tax buoyancy would go up. That despite reduction the revenue neutrality and tax buoyancy thereafter would be maintained," he added.