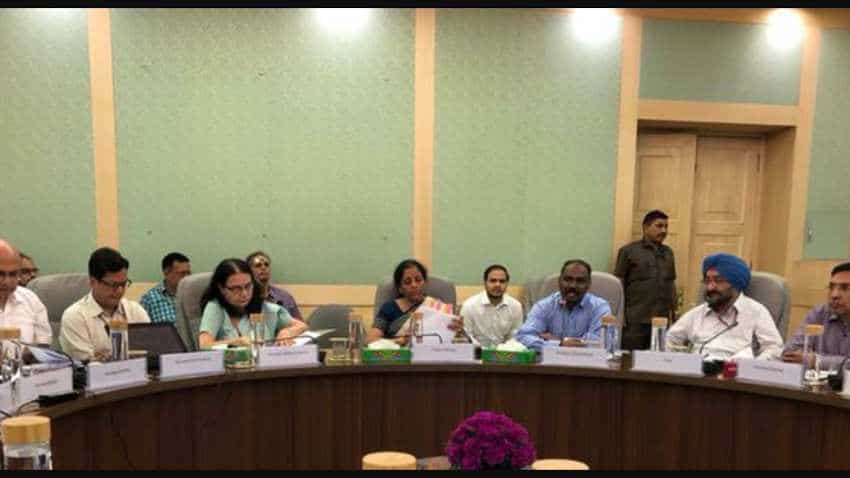 Union Finance Minister Nirmala Sitharaman on Friday addressed the media after her meeting with Secretaries and Financial Advisors of key selected Ministries. Briefing the media about the meeting Nirmala Sitharaman said, "Tomorrow, we will have a separate meeting with different agencies of public sector undertakings and other agencies which come under different ministries." Also, FM has asked ministries to release payments timely, and demanded to submit capex plan of 4 quarters.

FM Sitharaman has confirmed that there is no overdue payments with any ministry.

Moreover, briefing the media, FM said that the discussion on capex plan of PSUs will be taken up tomorrow. Additionally, it has been directed that MSMEs and service provider should get timely payments.

Finance Minister Nirmala Sitharaman on Friday reviewed the total capital expenditure of key ministries in 2019-20 and their CAPEX plans for the future. Finance Minister Nirmala Sitharaman held a meeting with the Secretaries and financial advisors of the ministries, including Agriculture, Road Transport and Highways, Housing and Urban Affairs, Jal Shakti, Rural Developement, Health, Skill Development, Textiles and Consumer Affairs, Tribal Affairs, and Women and Child Development, to understand their capex positions and whether they need further allocations

Union Finance & Corporate Affairs Minister Smt.@nsitharaman holding a meeting with Secretaries and Financial Advisors of key selected Ministeries to review total CAPEX by the Ministries in 2019-20 (till now) and plan for future CAPEX in current FY.@nsitharamanoffc pic.twitter.com/Ui03C1AKPC

With the Finance Ministry last week announcing a series of corporate tax cuts, which may cost the exchequer Rs 1.45 trillion a year, questions are being raised on the expenditure plans of the government and whether they need to be curbed to control any surge in fiscal deficit in view of low and slow tax collections.

Sitharaman ruled out any expenditure cuts as of now, and said her Ministry was asking for a quick release of funds to boost demand and consumption.

Though bond yields went up after the announcement of tax cuts, the Finance Minister said she was yet to take a decision on revising the borrowing limit for the second half of 2019-20.

The Finance Ministry will announce borrowing decisions for H2 on September 30. The budgeted target is Rs 2.67 lakh crore.